With elaborate set designs, dozens of props (including a giant aubergine), video projection, puppetry, live music, song, dance and a cast of approximately 37 performers on stage each night, Wild Swans is an ambitious theatre production to say the least. 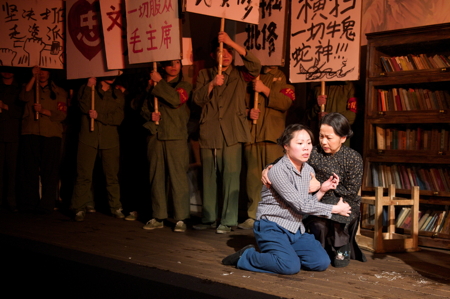 It is an adaptation of Jung Chang's best-selling novel Wild Swans: Three Daughters of China. Chang's family memoir traces the lives of three female generations through China's turbulent 20th Century history. In this production, the primary focus is on Chang's mother and father, while the story of Chang herself and her Grandmother fades into the background somewhat. A consequence perhaps of adapting a 700 page novel for the stage. But Chang's accounts of Mao's Communist China are brought to life nonetheless, albeit in a theatrically 'paraphrased' way.

Before the audience even take their seats the performance has already begun with a pre-set depicting a bustling 1950s market street complete with arguing street traders and child beggars.

Miriam Buether's layered set design is impressive but may have proved impossible to manage if not for Sacha Wares deft direction – an army of peasants sing revolutionary songs as they brush out and scoop up the earth of a field; others roll away the fences exposing white hospital walls; nurses simultaneously wheel in the patients in preparation for the next scene – it all alludes to Mao's frenzied work ethic and so the technicalities neatly become part and parcel of the unfolding story.

Gareth Fry's sound design deserves commendation as does Wang Gongxin's video design. The latter's contribution really enhances the sense of change as we move through the decades from 1948 to 1978. In one scene, Gongxin's projections recreate a paddy field and the result is one of eerie poetic beauty. And Michael Fowkes puppets who make a brief appearance at the beginning of the play were one of the highlights of the night.

Wild Swans is part of World Stages London and is the first performance of a season of shows which all draw on the history and experience of one of London's major cultural communities. And while this production might not entirely do justice to Chang's novel, it certainly allows us a historical glimpse into one of China's most tumultuous and grimly fascinating periods.