Food for thought at Pizza Express

Diners at the South Bank branch of Pizza Express are being greeted by a shocking piece of contemporary art based on South London crime statistics. 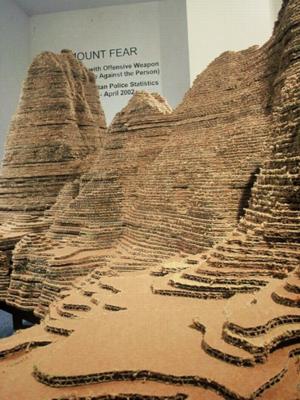 Assaults with bladed weapons – the view across Rotherhithe to Lewisham

Artist Abigail Reynolds, a finalist of this year's Pizza Express Prospects art prize, is exhibiting her sculpture, entitled Mount Fear, at Pizza Express in Belvedere Road on the South Bank.

Standing over two metres high, Mount Fear at first glance appears to be a mountainous terrain, resembling the Grand Canyon, sculptured out of layers of cardboard. However the landscape represents a map of South London with the height of each peak corresponding to the number of violent criminal incidents to have occurred over the previous year.

Abigail, who studied at Chelsea College of Art and Goldsmiths College, spent weeks collating Metropolitan Police crime figures identifying incidents involving bladed weapons before she could create her masterpiece. Her submission was one of 46 finalists short-listed from over 1000 entries of the prestigious national art prize, Prospects 2003.

Abigail, who lives near The Oval in Lambeth, said: "I was delighted to be a Prospects finalist and it is a double honour to have my work chosen to be displayed in a Pizza Express restaurant. I have previously only exhibited in galleries so this is a good opportunity to show my work to a new audience."

The work is on display until Friday 29 August. David Sykes, managing director of Pizza Express , added: "We were struck by the impact of Abigail's work and thought our customers would appreciate not only its stunning beauty but the serious message behind the work."