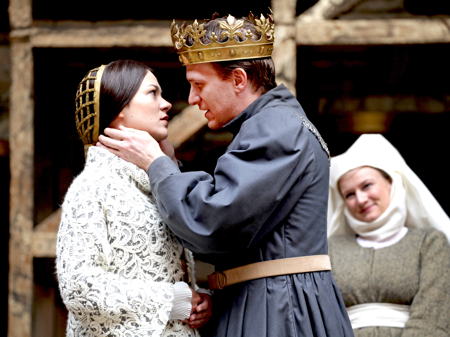 This chorus or prologue was, he suggested, maybe written for Southwark since the play had its premiere at the Globe on the day 'the wooden O' opened its doors in 1599.

In 1951 The Old Vic chose this play as its contribution to the Festival of Britain and Dominic Dromgoole's new production at Shakespeare's Globe is the climax of the ambitious and successful Globe to Globe season staged for Olympic year.

Hearing the chorus, an expressive Brid Brennan, describe Henry's return from Agincourt via Blackheath in 1415 one has to assume that Shakespeare knew that it was to St George the Martyr Church in Borough High Street that the King came.

Agincourt dominates the story with the build-up to the battle in France explored from Act I. Difficulties and risk are highlighted with some of Shakespeare's most quoted lines. The casualties of battle make this both a patriotic and an anti war tale.

It is a mixture of fact and fiction. Sir John Falstaff, who was much-loved by Elizabethan audiences and in life had lived in Tooley Street, makes an appearance without being in the cast. Shakespeare had promised to include Falstaff again and here we see Falstaff's body being removed from a tavern at the north end of London Bridge.

His drinking companions are left to provide the comedy between Henry's memorable speeches. Sam Cox as Pistol, David Hargreaves as Nim and Paul Rider as Bardolf receive huge applause.

Jamie Parker, appearing in his sixth Globe production, plays Henry as the supposedly quiet and compassionate leader only roused to oratory when required. This fits with Shakespeare's own description of the King at the end as being 'free from vainness and self-glorious pride'.

Parker's best moment is maybe when he receives the cheeky gift of tennis balls from the French. With perfect timing and clever speech inflection he catches every throw of the sample ball.

All the props, including a commode, are delightful. When the Royal family tree is laid on the floor it is revealed as a beautiful illuminated scroll.

Olivia Ross, as boy and then French princess standing up to the victorious king, does well in her stage debut.

The three hours and five minutes pass quickly but concentration can be broken by the intrusive helicopters.