The Taming of the Shrew at Shakespeare’s Globe 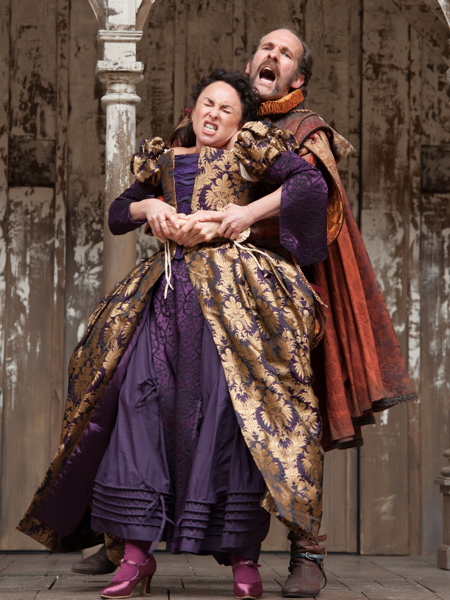 Get to the show early to hear and see the musicians, dressed in red like a Doggett's oarsman, playing on stage.

The production has an imperceptible start with Christopher Sly appearing to be a drunkard from Long Lane who has wandered in from The Anchor.

Local references are not out of place for the comedy does not open in Italy but a London tavern and its first performance was at the Elephant & Castle. After the interval (a modern invention) there is mention of bringing "horses to Long-lane end".

It appears that the first performance in 1594 may have suffered from a muddle of names. This play within a play can be confusing. It can also be offensive with its focus on woman's required submission in marriage.

But this production remembers that the play is one of Shakespeare's comedies. The Globe's artistic director Dominic Dromgoole calls it one of the playwright's "feistiest and wildest" plays.

Director Toby Frew presents it as a pantomime which of course always has to have local references, gesturing to the audience for participation and sometimes outrageous costume.

The more sober costumes at one moment look like a Victorian advertisement for Watts & Co.

The backdrop is distressed as might have been the Newington Butts theatre at the Elephant.

Simon Paisley Day is the single-minded Petrucio and Samantha Spiro is an impressively agile Katherina.

It is not certain that The Taming of The Shrew was ever brought north to the first Globe Theatre. But since the millennium it has been seen with an all-female cast at the present theatre and with an all-male cast at The Old Vic. This year's Shakespeare's Globe production is easily the most enjoyable.