London Bridge escalator won’t be fixed till end of Olympics

The 'skywalk' across Tooley Street from Hay's Galleria to London Bridge Station is likely to remain shut during the Olympic Games after one of the escalators broke down. 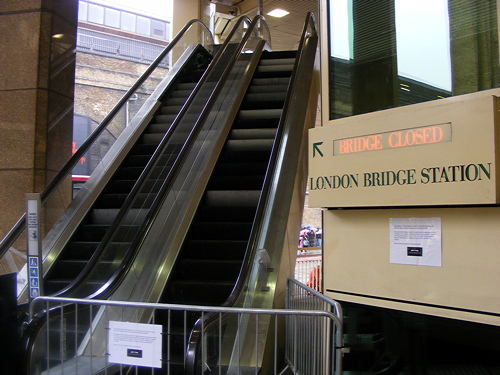 The escalator and bridge are controlled by the St Martins Property Group, the Kuwaiti owners of the London Bridge City estate.

The skywalk has already been closed for at least a week. According to notices posted at the foot of the escalator, the bridge is shut "due to the failure of a major component in the upward travelling escalator".

The notice continues: "The repair to this component requires a lengthy manufacturing process off-site in a factory.

"As a consequence these facilities will remain closed for a period of at least four weeks from Friday 13 July.

"Every effort is being made to reduce this timescale and an update on progress will be provided when available."

The four-week period mentioned on the notice would end a couple of days before the Olympic closing ceremony on 12 August.

The station this week held a rehearsal of its Olympic arrangements.