Flowers planted by guerrilla gardeners to brighten up the piazza at the junction of Trinity Street and Great Dover Street have been torn up and put into rubbish sacks by an overzealous council street cleaner. 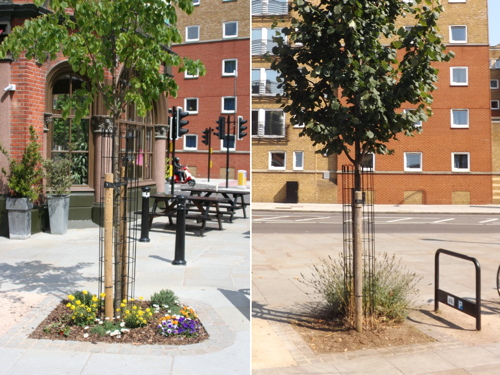 Before and after: one of the tree pits pictured in summer 2010 (left) and an adjacent tree pit this week after a council cleaner had visited (right)

The flowers and shrubs planted in six tree pits have been tended for two and half years by local residents led by Clare Armstrong and advised by guerrilla gardener Richard Reynolds.

Two summers ago Clare Armstrong won a Green Corners award from the Conservation Foundation in recognition of her work at the Trinity Street Piazza.

However, when she passed the site on Saturday evening Ms Armstrong found that more than 20 hours of community gardening had been destroyed.

"I was shocked to return home and find that Southwark Council operatives had removed nearly all the plants which were planted by me and my neighbours in March 2010 in the tree pits in the newly-pedestrianised Trinity piazza," she said.

"Only the large lavenders remained – they were presumably too difficult to pull out. All the other plants had been stuffed into white Southwark Council rubbish bags which were waiting to be collected."

"This planting was a fantastic community effort and all the plants were paid for by me and other local residents out of our own pockets.

"As the plants have matured the Trinity piazza has become a well-used community space which people of all ages enjoy on a regular basis."

By coincidence, members of the Southwark Labour hierarchy had gathered in the adjacent Roebuck pub on Saturday for a policy-making event.

"This was a genuine mistake made by an inexperienced cleaner sent to weed the adjacent paved area at the weekend and we sincerely apologise to Ms Armstrong and all the residents who worked so hard on the planting," said Cllr Peter John, leader of Southwark Council.

"Our officers have now attempted to make contact with Ms Armstrong to arrange to meet with her on site and discuss the supply and replanting of replacements as soon as possible."

Richard Reynolds, London's most famous guerrilla gardener, launched his Pimp Your Pavement initiative at Trinity Street back in 2010 to encourage more people to adopt tree pits for small-scale planting.

"The attack at Trinity Street is a tragedy but it's also hopefully a wake up call for Southwark Council and your public realm strategy," he said in an email to senior councillors.

"It's a remarkably misguided moment of negligence / incompetence / aggressiveness (take your pick of a suitable adjective) because of all the notorious places in SE1 that I've been involved in transforming with plants this is the ONLY one that was done with Southwark Council's permission first and therefore surely the ONLY one that your organisation should have consulted on first if they had any interest in tending it."