The London Bridge Experience has changed its name to 'The Crypts' after its parent companies were placed in administration. 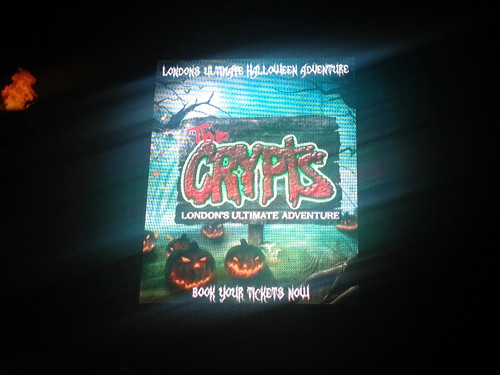 The horror attraction underneath the southern approach to London Bridge was launched in 2008 by Bermondsey-born brothers Lee and Danny Scriven as a rival to the nearby London Dungeon.

Administrators FRP Advisory LLP were appointed to London Bridge Experience Ltd at the end of September. That company's sole shareholder is London Tombs Ltd which was placed in administration on 3 October.

The attraction remained open to visitors but on Monday 15 October the London Bridge Experience and London Tombs signs were painted out and replaced with temporary signs announcing 'The Crypts'.

A new website has been launched at www.thecrypts.co.uk using a domain name registered to Danny Scriven. The website's privacy policy suggests that The Crypts has links to the My Big Fat Greek restaurant at Elephant & Castle which is co-owned by Scriven.

The former website for the London Bridge Experience at www.thelondonbridgeexperience.com is no longer live.

A spokeswoman for FRP Advisory LLP told us last week: "The bank received formal notification of the liquidation of London Bridge Experience Ltd and enquiries about this notice were made with the former directors and the proposed liquidator.

"It was stated by the proposed liquidator that the business has ceased trading because of forfeiture of the company's lease. However, it was established that the trade of London Bridge Experience was in fact still being carried on from the premises.

"The bank therefore decided to protect its position and those of creditors generally by appointing FRP Advisory as administrators to London Business Experience Ltd on 30 September and then to London Tombs Ltd on 3 October."

The SE1 website understands that "the bank" is the Aldermore Bank of Peterborough.

The spokeswoman added: "Administrators are currently in discussion with various stakeholders over the business and are seeking to sell the business as a going concern."

The website for The Crypts contains no email or telephone contact information and it is unclear whether tickets for the London Bridge Experience will be honoured by the new attraction.

• We have invited FRP Advisory to comment on the latest developments.