Two people are dead following a helicopter crash at Vauxhall. Nine are injured. 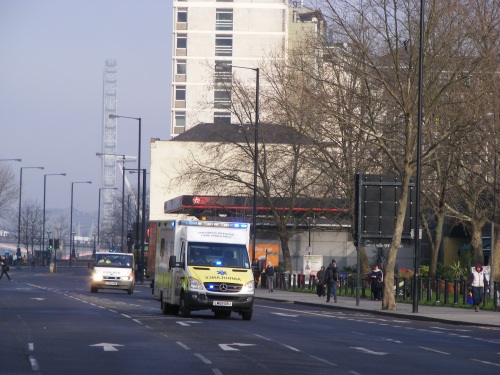 Emergency vehicles on their way to Vauxhall along Albert Embankment 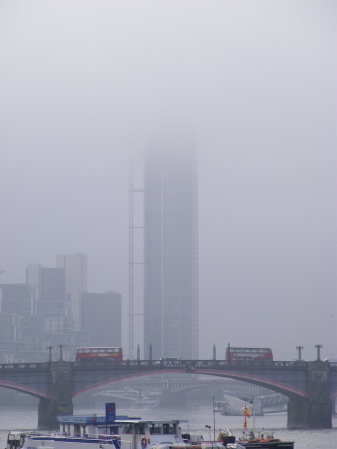 St George's Wharf in mist after the crash 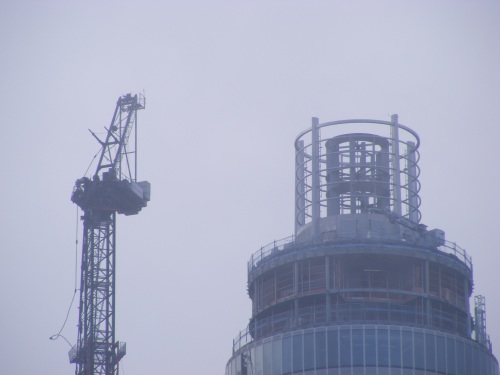 Top of tower and crane as mist lifted 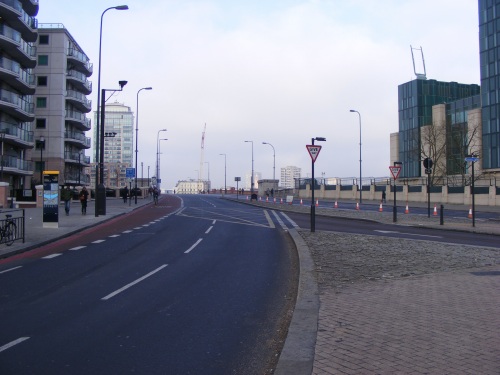 Vauxhall Bridge closed on Wednesday morning. MI6 is on the right. 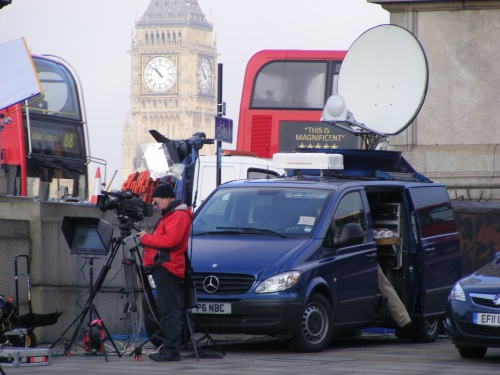 NBC preparing to broadcast live to America from Lambeth Bridge 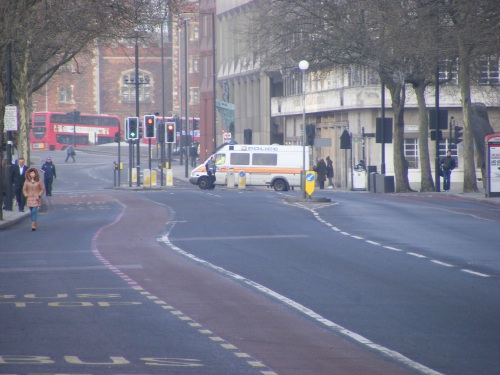 The helicopter hit the top of a 750-foot crane on the St George's Wharf development site at around 8am on Wednesday morning. The aircraft came down in Wandsworth Road just north of the railway bridge carrying the south western main line from Waterloo Station.

Albert Embankment was immediately closed to traffic whilst huge traffic jams built up on Lambeth Bridge and in Lambeth Road. But as a result of the incident traffic was at first unusually light in Blackfriars Road.

Waterloo trains were halted for only ten minutes whilst the track was checked for debris.

It is understood that fears of a terrorist attack led to emergency procedures being triggered in the MI6 building on the SE1 side of Vauxhall Bridge which was also closed. Armed police with dogs were posted at Westminster Station.

Extra concern was caused by the crash taking place whilst the top of the tower building and its crane were hidden in mist. The exclusion cordon was briefly widened as rumours spread about the possibility of a partial building collapse and dust cloud.

The helicopter is understood to be a commercial aircraft flying to or from Surrey. The pilot died in the crash.

The crane operator was reported to have been late for work.

The crane remains in a precarious position according to the London Fire Brigade, which sent 88 firefighters and officers to deal with the incident.

The London Ambulance Service sent a motorcycle responder, seven ambulance crews, a hazardous area response team, the air ambulance's medical team in a car and four officers to the scene, with the first crew arriving in less than four minutes.

Six casualties were taken to hospital by ambulance: five for minor injuries and one patient for a broken leg. Four of the patients were taken to St Thomas' Hospital and two – a man and a woman – were taken to King's College Hospital.

A further seven patients were treated at the scene.

Cllr Lib Peck, leader of Lambeth Council, said: "Our first thoughts are with the families of those who have lost their lives in Vauxhall this morning.

"I want to praise the response of the emergency services who are at the scene. I understand that swift action by the fire service may well have saved the life of one of the casualties of the crash.

"The incident has been a shock for the many residents and workers in this densely built up residential and commercial area with tragic deaths and serious injuries.

"The safety of Lambeth residents is my major concern and I will be seeking reassurances about the procedures governing helicopter flights."