A developer has bought Erlang House and Hill House in Blackfriars Road and plans to build up to 400 new homes on the site. 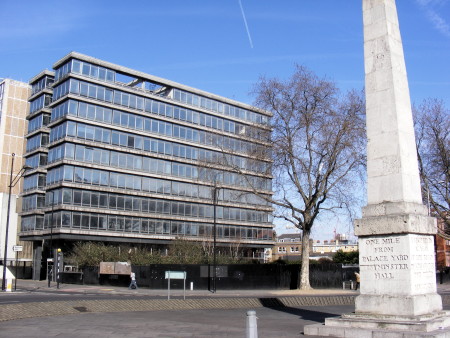 Erlang House and Hill House are at the southern end of Blackfriars Road on the east side close to St George's Circus.

Barratt says the development will include up to 400 homes with a mix of open market and affordable units.

The company also plans to build 600 homes at Cannons Wharf near Surrey Quays.

"We are delighted to have secured these high profile projects within London," said Mark Clare, chief executive of Barratt Developments.

"Barratt has a strong track record of delivering in London and our capability to design, build and sell large complex schemes is giving us a competitive advantage in the capital."

Barratt's scheme is the latest in a number of proposals for hundreds of new homes on Blackfriars Road.

492 homes are proposed at the very far north end of the road where Carlyle Group plans to redevelop Ludgate House and Sampson House.

Permission has already been granted for 274 homes in St George's One Blackfriars development.

A further 300 flats were also consented in the stalled 20 Blackfriars Road scheme, bringing the development pipeline total to at least 1700 homes on or very close to Blackfriars Road.