Members of the Southwark Pensioners Action Group were ordered to leave the Southbank Centre on Wednesday lunchtime after they held a protest against rising energy bills. 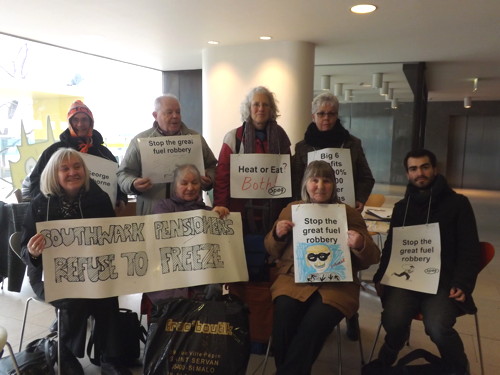 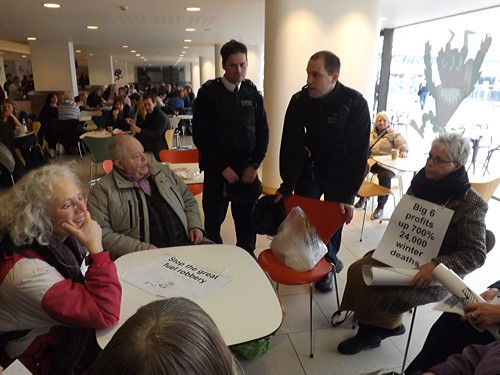 Police officers remonstrate with the protesters in the RFH foyer

The protest was organised as a warm-up for this weekend's 'Stop the Great Fuel Robbery' event to be held outside the Department of Energy and Climate Change.

As the group assembled outside the Hayward Gallery a Southbank Centre security guard approached and explained that as the arts complex is "private property" no demonstrations are permitted.

The protesters defied the ban and moved to the Royal Festival Hall where half a dozen security staff quickly arrived on the scene to deal with the seven-strong protest group.

The protesters continued to hand out leaflets to customers at the Riverside Terrace Cafe while security guards took photos of the activists.

When the pensioners' group refused to leave, Southbank Centre managers called the police and warned that the protesters faced arrest if they did not leave voluntarily.

Within minutes a sergeant and two constables from Lambeth Police arrived at the RFH and urged the group to leave. The protestors later moved on to the London Eye which is sponsored by leading energy firm EDF.

A Southbank Centre spokeswoman said: "The protesting was disrupting an event being performed by children taking part in our Imagine festival, so the group were given the option to remain in the hall if they stopped protesting or leave the hall.

"As they continued to protest, Southbank Centre staff called the police, and on arrival, the police also asked them to leave, which the group then did."