HMS Westminster, a Royal Navy type 23 frigate, passed through Tower Bridge on Wednesday afternoon as it arrived in the Pool of London for a five-day visit. 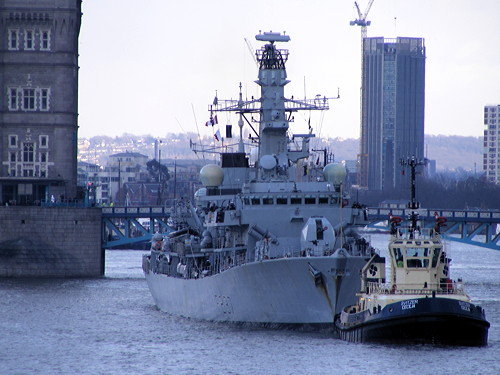 The vessel – which entered service 20 years ago – will be berthed alongside HMS Belfast during her 75th anniversary celebrations this weekend.

HMS Westminster's commanding officer Captain Hugh Beard will pay visits to the Deputy Mayor of Southwark and the Lord Mayor of Westminster.

The vessel will also host invited guests and dignitaries for a reception and capability demonstration.

On Sunday members of her company will parade at a service in Westminster Abbey.

The ship is one of the Royal Navy's 19 multi-role frigates and destroyers. She was last seen in central London in 2008.

Later this year the ship will be assigned to the UK's maritime quick-reaction force, the Response Force Task Group, on an exercise to the Mediterranean called Cougar 13. From the autumn she will be sent to the Middle East.