A eucharist has been celebrated at St Johnâ€™s Church in Waterloo as part of a ring of prayer surrounding the meeting of 38 Anglican archbishops at Lambeth Palace. 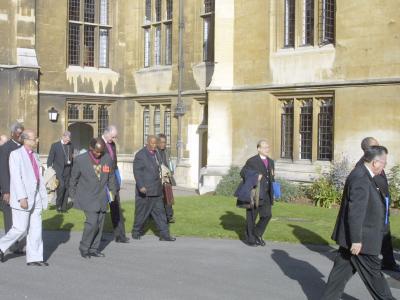 Some of the Primates of the Anglican Communion in the courtyard of Lambeth Palace (Photo: Jim Rosenthal/Anglican World)

The three parish churches around Lambeth Palace held simultaneous services to pray for the world's Anglican archbishops who are discussing homosexuality and the future direction of the church.

The other churches involved were St Peter's at Vauxhall and St Matthew's at Westminster. Archbishop Rowan Williams visited his local church St John's Waterloo on Mothering Sunday soon after his enthronement this year.

Southern Africa's Archbishop Njongonkulu Ndungane, speaking from the Provost's Lodging on Bankside, told BBC Newsnight that he was hoping for an agreement to more discussion through a commission rather than a split.

The deliberations at the Archbishop of Canterbury's official residence Lambeth Palace are due to end late on Thursday 16 October when a press conference is expected to be held.

The three parish church services were organised by www.inclusivechurch.net which was set up following the row about Canon Jeffrey John's appointment as Bishop of Reading and the request for him to stand down. The new group believes that a person should be appointed bishop "regardless of their sex, race or sexual orientation". 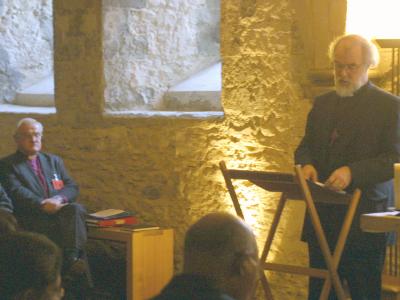 The celebrant at the Waterloo service was Dr Jane Shaw, Dean of Divinity and Chaplain at New College Oxford.

• The visiting Archbishops are staying at Days Hotel in Kennington Road where television crews have been interviewing some of the church leaders in advance of the gathering's formal opening.