A new portrait of Dame Maggie Smith painted in the Southwark studio of artist James Lloyd has gone on display at the National Portrait Gallery. 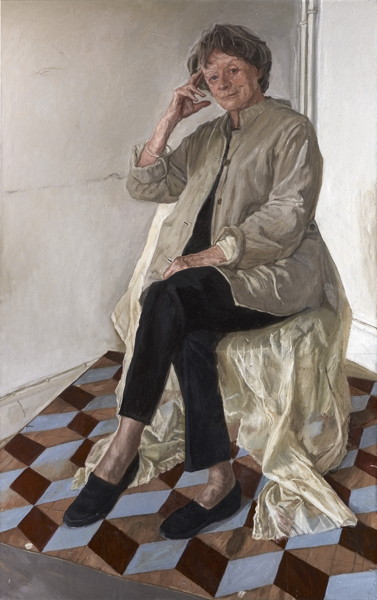 Lloyd is a resident artist and tutor at the Southwark-based Art Academy independent art school.

The oil painting – which is six feet high – shows the Downton Abbey star in jacket and trousers sitting in a bare studio on a draped chair which is placed on an intriguing trompe-l'oeil platform.

The red and blue chequer-board pattern of the platform give colour to an otherwise muted palette of grey, black and brown.

The sittings began in 2011 and took place at the artist's studio in Southwark Street. Lloyd started by working on sketches, in both oil and charcoal, and took photographs to determine the pose he wanted. He settled on one in which Dame Maggie was seated cross-legged, her head tilted to rest on a raised hand, with her eyes looking out at the viewer.

Lloyd made a plinth to raise her to eye level when seated, a small platform painted with an illusory cube pattern he often uses, in this case to convey a feeling of the stage. The tumbling drapery catches the light as it falls, adding, he says, "a certain monumentality to an otherwise ordinary studio chair".

While Dame Maggie indicated she was very happy "to be directed" the artist did not want to represent her in period costume or as one of her characters in which she is known to millions. This was to be a contemporary painting of the actress in her everyday attire.

Despite her busy work schedule, Dame Maggie was very obliging with her time. Having painted actors in the past, Lloyd was aware that if the painting process went on long enough sitters' appearances were liable to change according to the roles they were currently playing. In this instance, Dame Maggie turned up to one sitting with peroxide blonde hair (she had started work on the film Quartet directed by Dustin Hoffman). Lloyd could have included this but he decided to go with her previous hair colour, in keeping, he says, with the tone of the portrait.

"I was delighted to be asked by the National Portrait Gallery to paint Dame Maggie Smith: not only because this was an opportunity to have a third painting in the gallery's collection, but also for the honour of trying to portray such a luminary of stage and film," said James Lloyd.

"I learnt that Dame Maggie had been reluctant to have her portrait painted in the past, and at my first meeting with her, her opening words were 'Poor you'. This was quite the opposite from my own feelings, and everyone to whom I mentioned the commission was extremely envious (I lost count of the number of people who offered to make tea during the sittings!)

"It is a large canvas but I don't think it's flashy. I was after a certain understated grandeur. The background is quite stark, and apart from the patterned floor there is little colour bar the neutral greys and browns.

"This directs the concentration on to the warm flesh tones of the face. And with a face and character like Dame Maggie Smith's that's definitely more than enough."

• The portrait can be seen in room 35 in the ground floor Lerner Contemporary Galleries at the National Portrait Gallery.