Two violent armed robbers who targeted a series of small businesses and bookmakers - including a convenience store near Shad Thames - have been jailed at Southwark Crown Court. 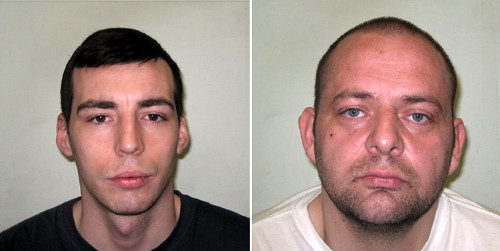 John Robinson, Charlie Garratty and Jack Lloyd had previously pleaded guilty at the Old Bailey to a number of offences in connection with the raids between 10 November 2011 and 10 March 2012.

35-year old John Robinson from Wapping and 25-year-old Garratty from Bermondsey were jailed for a total of 12 years.

The Flying Squad at Barking launched Operation Coche to investigate the series of offences in east London, south London and Essex.

Police say that all the offences were well-planned and the suspects not only vocal in their threats towards vulnerable victims but also very violent during several offences while brandishing an imitation firearm.

The men were arrested in March 2012 and subsequently charged.

At about 5pm on 17 December 2011 three men entered Olive Foods at The Circle in Queen Elizabeth Street, one armed with a metal pole and one armed with a black handgun. All had their faces covered to conceal their identity. Demands were made to staff before they made off with around Ł1,000.

Robinson and Garratty pleaded guilty to robbery and possession of a firearm.

The trio were also involved jointly and separately in robberies at The Blue, the Wibbley Wobbley pub in Rotherhithe and across south London, east London and Essex.