This outstanding production doesn't require sun in order to shine. 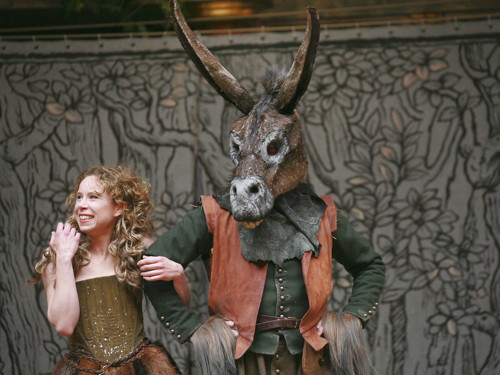 The difficulty with staging Shakespeare is that it is all too easy to get wrong and extremely difficult to get it just right. Many failed attempts have been recorded; far fewer stand-out performances have been immortalised. A Midsummer Night's Dream is hampered by a further difficulty. It has almost become a rite of summer, performed across the land by amateur and professional theatre companies alike, and its plot and characters are therefore all too familiar.

Yet the Globe manages to imbue its production with a freshness that allows the audience to feel they are watching the action unfold for the first time. The fairies inhabit a darker forest than is the norm, yet the comedic elements of the play are enhanced through witty staging and brilliant casting. Two actors are always critical to the success of A Midsummer Night's Dream; Bottom and Puck. And here neither disappoint. Pearce Quigley as Bottom merely needs to open his mouth and the audience begins to chuckle. Matthew Tennyson as Puck is a wonder to behold, flitting around the stage in an almost inhuman manner.

If plays were measured solely on the laughs they generate, this one would be doing extremely well. Thankfully they are not, and this A Midsummer Night's Dream does not rely upon them. The actors who play Hermia and Lysander, and Helena and Demetrius, are all excellent and entirely believable. The motley troupe of actors is wonderful to watch, as they tap and dance their way across the stage. The one criticism that could be levelled, were one needed, is that the chaotic play-within-a-play performed during the final scene is overly long and juvenile. This, however, is much more the fault of the playwright himself rather than the director, Dominic Dromgoole (the Globe's artistic director).

This summer may not deliver much sunshine, yet this A Midsummer Night's Dream is almost guaranteed to put a smile on your face.