A Peckham man has been jailed for grievous bodily harm after another man was stabbed in the head with a screwdriver in Tabard Street. 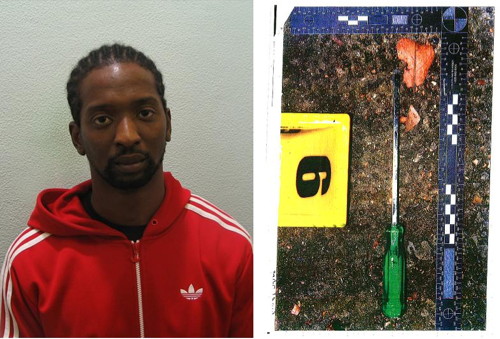 Akeem Badmus and the screwdriver used in the attack

31-year-old Akeem Badmus from Peckham was part of a gang that attacked the victim in Tabard Street on 1 March 2012.

A member of the group plunged the weapon into the victim's head with such force that it was embedded 13cm into his brain.

The victim, aged 20 at the time, is continuing a gruelling recovery and has now regained a degree of movement and speech. However, he will suffer the effects of the attack for the rest of his life.

On Monday Badmus was jailed for ten years at Southwark Crown Court after pleading guilty on Friday to causing grievous bodily harm.

"This was a savage attack that left a young man on the verge of death, and he may never fully recover," said Detective Inspector Dave Reid.

"I trust that the lengthy sentence imposed by the court today will provide some consolation to the victim and his family."

Police were called to reports of a stabbing in Tabard Street at about 8.55pm on Thursday 1 March 2012.

The victim was taken to King's College Hospital and the initial prognosis was so pessimistic that the matter was passed to the Metropolitan Police's homicide and serious crime command.

The incident happened when both Badmus and the victim came to Tabard Street to take part in the filming of a music video.

Detectives say that an argument erupted over a small drugs debt and this was the catalyst for the stabbing.

Over the course of the next couple of months detectives arrested a total of 11 men in connection with the incident, including Badmus on 6 May 2012.

He was bailed before being charged with attempted murder on 30 November last year. The other 10 men were released with no further action.

During the trial the defence counsel offered a guilty plea for grievous bodily harm and this was accepted by the prosecution.