Sweet Bird of Youth at The Old Vic

This may not be a flawless production but its characteristics reflect those of its own characters; imperfect, compelling and beautiful. 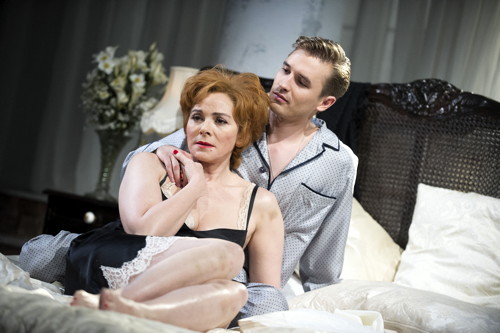 Securing a big name to star on stage is by no means a guarantor of success. The name in lights brings with it increased exposure, scrutiny and expectation. That name must credibly fit the role, yet it must also feel as if their most famous character is doing more than just play-acting in a less-known role.

Kim Cattrall (best known as Samantha from Sex and the City) is, seemingly, perfect casting to play Alexandra Del Lago, the fading movie star with a thing for younger men in Tennessee Williams' Sweet Bird of Youth. The two roles share many similar traits. Yet Alexandra Del Lago offers Cattrall the opportunity to play an ultimately more flawed and damaged character. And she successfully pulls this off in the Old Vic's production, with only a bit of misplaced melodrama.

Yet Sweet Bird of Youth is not all about Alexandra Del Lago, or Kim Cattrall. Not only does De Lago have to share the stage with Seth Numrich as Chance Wayne, Chance steals the show. He is the more tragic of the two tragic roles; returning to his home town in a borrowed car and clothes that were bought for him, to try to win the heart of a girl that he can never be with.

Numrich brings the precise mix of bravado and vulnerability to the role, and he is a match for Cattrall's on-stage presence. The chemistry between the two characters is not always pitch perfect; as is exposed in the first hour of the play when no other characters are present. But as the audience learns more about Del Lago and Wayne, so the two protagonists come to understand one another, and their relationship develops to the extent that you believe there is real affection (if not longing) between them.

Williams repeatedly revised Sweet Bird of Youth during the 1950s and 1960s. These revisions were not cosmetic, but had the power to change the fate of the central characters. The dramaturg for the Old Vic's production, James Graham, has chosen wisely from the various script versions; the ill-fated lovers never meet, and the last scene ends precisely how it should. There is therefore as much power in what we don't see as there is in what we do.

This production of Sweet Bird of Youth is beautifully (and at times hauntingly) evocative of the Deep South during the 1950s. The stage is elegantly matched to the décor of The Old Vic, and transforms from opulent hotel room to colonial-style mansion seamlessly, using almost perfect period details.

Sweet Bird of Youth may not be Tennessee Williams' most accomplished play but it remains powerful in its portrayal of the tensions inherent in mid-twentieth century America. The Old Vic's production inevitably reflects the flaws of the original, yet is still a compelling and stunning piece of theatre.