Demand for Waterloo Foodbank has doubled since April

The number of people fed by the Waterloo Foodbank has doubled since benefit reforms were introduced in April, according to local minister Steve Chalke. 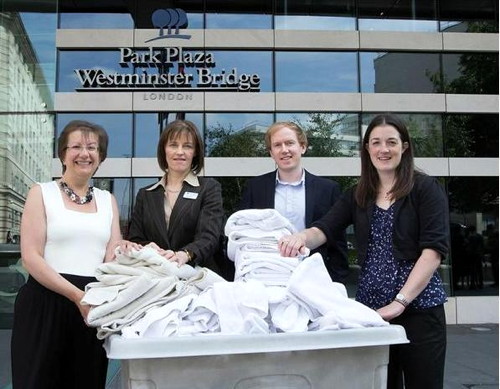 A Waterloo charity that provides food to the borough's most vulnerable families is to benefit from money raised by recycling textiles from a local hotel.

The Waterloo Foodbank has teamed up with Park Plaza Westminster Bridge and Waterloo Quarter BID to raise money by recycling towels, linen, blankets and pillows from the hotel.

The idea stemmed from the free recycling service that the business improvement district provides to local firms through recycling company First Mile.

First Mile will now collect old textiles that are accumulated by the hotel. The material will generate up to 40p per kilo and it will be recycled into new items, or if in good condition can be sold for re-use. The 1,000 room hotel is one of the busiest in London, and is often fully booked.

In the first year of this initiative the hotel expects to recycle more than 1000 towels, 300 pillows and 300 blankets which will raise more than £500 for the foodbank.

"Since April this year, when many benefits changes were introduced, the number of individuals being fed by the Waterloo Foodbank has increased from an average of 96 to 191 per month," said Steve Chalke, founder of the Oasis charity and senior minister of Oasis Church Waterloo.

"In July alone 149 adults and 96 children have benefitted from food parcels distributed from Oasis Church Waterloo. The support that this initiative brings is crucial to the sustainability of the project in the face of vastly increased demand."

"We are delighted to continue this success and support our local community with increased recycling schemes and pioneering new technology."