Former east London MP George Galloway has called on the Metropolitan Police and home secretary to ban a proposed march from Southwark to Tower Hamlets by members of the English Defence League. 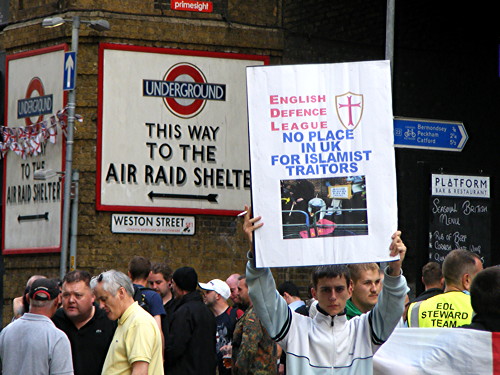 Coachloads of EDL supporters are expected to arrive in Tooley Street on Saturday lunchtime where a march will form up at 1pm and cross Tower Bridge into the borough of Tower Hamlets.

In an early day motion, the Respect MP for Bradford West says that "the intention of the EDL is to whip up racial tension, division and violence directed particularly against the large Muslim community in Tower Hamlets".

The EDL says that "radical Islam is increasingly calling the shots" in Tower Hamlets. The controversial group insists that it is anti-racist and anti-fascist.

Mr Galloway's motion, which has so far attracted no other signatures, calls on Metropolitan Police commissioner Sir Bernard Hogan-Howe to recommend to home secretary Theresa May that the march be banned.

Cllr Neil Coyle, Labour parliamentary candidate for Bermondsey & Old Southwark, tweeted on Tuesday to say that the EDL is "not welcome in Southwark".

There were tense scenes on Tooley Street in 2011 when crowds from an EDL demonstration at Aldgate dispersed at London Bridge.