'Most expensive' council homes go under the hammer

Southwark Council hopes to raise at least £2.3 million when it sells two prominent houses at the corner of Park Street and Redcross Way. 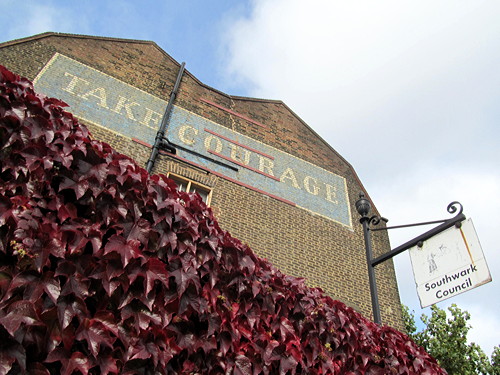 The building, with its 19th century 'Take Courage' advertising, has been owned by Southwark Council since the abolition of the Greater London Council in the mid 1980s.

Dating from around 1820, it is thought to have originally served as accommodation for managers or directors of the massive Anchor Brewery on Bankside.

Changes of ownership eventually led to acquisition of the brewery by Courage and the painting of the prominent 'Take Courage" advertisement.

After the transfer from the GLC, Southwark Council used the property as part of its housing stock and the self-contained basement area was used by the authority as a local office.

The building will go under the hammer at Savills on Monday with a guide price of Ł2.3 million.

"The costs of repair and refurbishment, coupled with the sale price mean that selling this building was always the best option," said Cllr Fiona Colley, cabinet member for regeneration.

"The receipt will contribute to our new 11,000 council house building programme."

Deputy council leader Cllr Ian Wingfield added: "Selling council homes is not something I would ordinarily advocate, but this is a no-brainer in terms of the capital we'll receive to invest back into housing, for improving existing stock and new build."

Chris Coleman-Smith, head of auctions at Savills, said: "We think this will be the most expensive council home ever sold, and we're delighted that the proceeds of sale will contribute to creating more housing in the borough."

She told the SE1 website: "Cllr Wingfield says that 'selling council homes is not something I would ordinarily advocate' however since Labour took control of the council in 2010 they have sold off or demolished over 800 homes. At the same time they have only built 26 new ones.

"Rather than being proud to be selling the most expensive council homes in the country, they should be thinking about how the loss of two more 6-bedroom properties will affect families on the waiting list for larger homes.

"This comes within months of them selling a 5-bedroom house in Hayles Street, which needed only Ł10,000 of repairs.

"It just goes to show that anything is up for grabs in Cathedrals ward if the price is right."

The building is grade II listed and will need structural repair and refurbishment by the purchaser.

The auction is to be held at the Marriott Hotel in Grosvenor Square at 9am on Monday 28 October.