The Leathermarket Community Scultpure Project has been awarded a 'SAFTA' as Southwark's Best Community Arts Project. 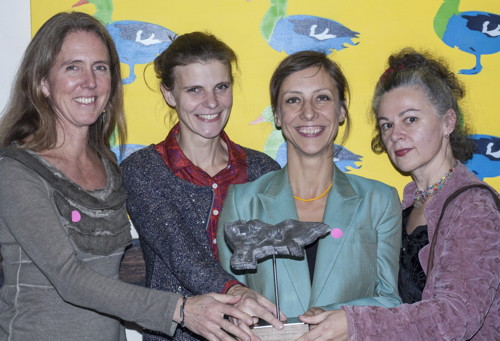 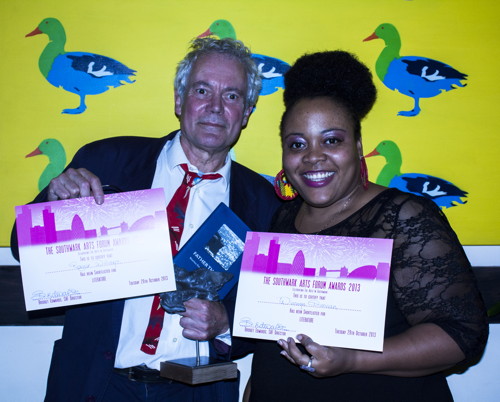 Roger Williams and Winsome Duncan, winner and runner-up in the literature category 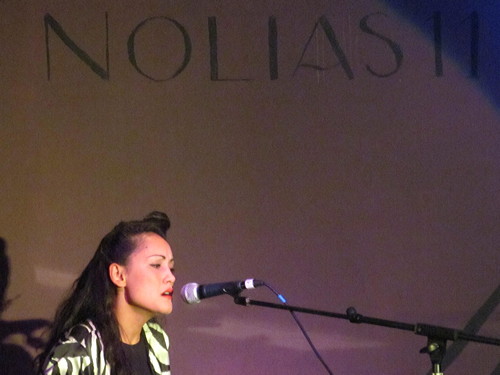 The first Southwark Arts Forum The Awards ceremony, or the 'Saftas night', was hosted by Nolia Devlin at Nolias 11 jazz club in Stamford Street on Tuesday evening.

Cllr Veronica Ward, cabinet member for culture, leisure, sport and volunteering, said that it was important to celebrate what so many artists were doing in Southwark and predicted that the Saftas would become a tradition.

The Leathermarket Community Sculpture Project is a collaboration between internationally recognised Bermondsey sculptor Austin Emery and the Leathermarket JMB. Dozens of residents participated in the workshops on the Tyers Estate in October 2012 and in White's Grounds this autumn.

The pieces sculpted by local residents during the workshops will be incorporated into permanent artworks to be installed on each estate next year.

The Safta for best community arts project, sponsored by Tate Modern and the first of the night to be announced, was accepted on behalf of Austin Emery who, in a message from Palestine, said: "I want to bring art to anyone and everybody and to bring people together. I believe we are all artists in that we all have a unique core expression."

The best community arts project winner had to be seen to have encouraged Southwark’s public to take part in the arts. The sculpture project was shortlisted alongside projects run by Dulwich Picture Gallery and Theatre Peckham.

The literature award, sponsored by Pharma Publications of Tower Bridge Business Complex, went to Roger Williams for his book Father Thames published last year. The author, who said that he had never won anything in his life, was nominated by Woolfson & Tay bookshop in Bear Lane.

Father Thames is described as twenty short stories 'from the incoming tide' featuring invaders, migrants, royalty and refugees who have 'come up Britain’s liquid highway to London'.

Also shortlisted in the Literature category was Winsome Duncan who earlier in the evening won the Emerging Talent prize sponsored by Alan Camp Architects in Union Street.

The visual arts award, sponsored by Workspace Group, went to the South London Women Artists for their SLWA Dinner Party, an interpretation of Judy Chicago’s The Dinner Party, which the group staged in Tanner Street for International Women's Day. The original Dinner Party installation was first exhibited in 1979 and is now at the Brooklyn Museum, New York.

Shortlisted for the celebrating diversity award was The Dragon Cafe which has been open on Mondays at St George the Martyr's crypt. Projects or programmes should champion inclusion and promote artistic endeavour of those from different backgrounds. Sarah Wheeler, one the leaders of the project which features food and creative art as a response to mental health issues, said that the cafe will reopen next year.

The celebrating diversity winner was CoolTan Arts in Walworth Road which had also been shortlisted along with the BEAM Art Group at the Southwark Resource Centre.

The ceremony was compered by SAF trustee Beverly Mason. At the close of the event X Factor contestant Zoe Devlin performed three songs.

The event opened with a reception in Nolias 11 gallery where guests viewed the Malaysia Eye art exhibition which was specially extended for the occasion by Malaysia's Ministry of International Trade and Industry. Also present during the evening was Morne Hashim of Kuala Lumpur's Morne Art Gallery which had organised the art show.

The award trophies were designed and produced by the London Sculpture Workshop in Willow Walk.