Firefighters say that a blaze in a flat on the Rockingham Estate was caused by tea lights lit to celebrate the Hindu festival of Diwali. 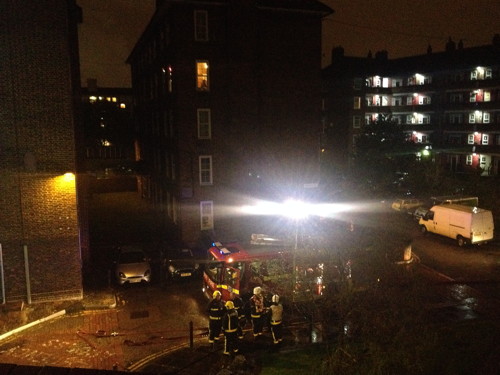 The fire brigade was called to the five-storey block of flats in Rockingham Street late on Sunday evening. Four fire engines from Westminster, Dowgate, Dockhead and Lambeth fire stations went to the scene with 21 firefighters and officers.

Westminster Fire Station is one of those scheduled for closure under cuts proposed by the Mayor of London Boris Johnson.

A woman who was suffering from shock was treated at the scene by London Ambulance Service.

The fire is believed to have been caused by tea light candles used to celebrate Diwali and left unattended when the occupants left the property.

A London Fire Brigade spokesperson said: "Candles are one of the most common causes of fire.

"It's really important that you never leave a candle unattended and keep them away from curtains and anything else that can easily catch fire."