Nearly 150 people took part in a 'Lorries for Savvy Cyclists' event in Tooley Street on Wednesday morning designed to educate cyclists how to stay safe near heavy goods vehicles. 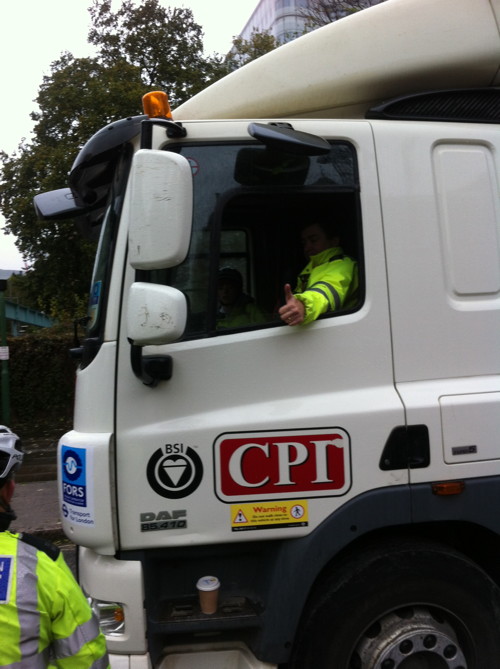 Safety tutorials allowed cyclists to sit in an HGV cab and talk to Metropolitan Police Cycle Task Force experts to better understand blind spots and be as well informed as possible when taking to the London streets.

During the three-hour event around 50 cyclists climbed into the HGV cab and the Met Police security marked more than 60 bicycles.

In addition, the popular Dr Bike service was on hand to make sure cyclists were completely roadworthy before setting off on their onward journey.

An HGV cab and concrete mixer trailer were provided by CPI Euromix and Berkeley Homes.

"Organising events for cyclists to be able sit in the cab of an HGV and understand the dangerous blind spots is really useful training and we plan to organise as many as possible," said Cllr Barrie Hargrove, Southwark's cabinet member for transport, environment and recycling.

Harry Lewis, managing director of Berkeley Homes (South East London), said: "The recent tragic cycling fatalities in the capital highlight the importance of road safety in London and the purpose of the Savvy Cyclists event is to educate all road users about better road safety.

"As London's premier developer, we feel it is our responsibility to facilitate these training sessions where cyclists can trade places with a lorry driver and see the road from their perspective."

There will be more Lorries for Savvy Cyclists events in London Bridge and Bankside through 2014.

Members of the London Cycling Campaign staged a protest outside City Hall on Wednesday morning to urge Mayor of London Boris Johnson to make safety improvements to the Cycle Superhighway network.