An armed robber - who was apprehended by a police officer, a trainee ambulance driver, two roofers, two security officers and an ice cream man - has pleaded guilty to two offences. 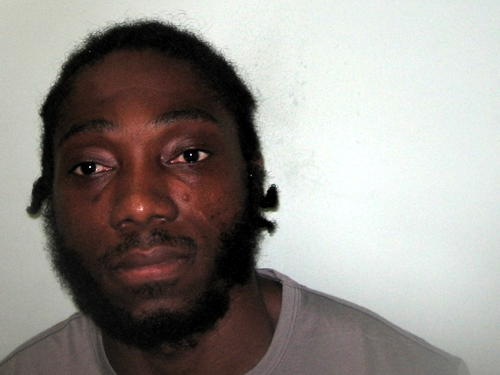 30-year-old Al-Fodday Fofanah of Ford Open Prison pleaded guilty at Woolwich Crown Court on Wednesday to two counts of attempted armed robbery, two counts of possession of an imitation firearm and escape from custody after his attempts to rob Barclays Bank in Borough High Street last July were dramatically foiled.

The seven men who helped apprehend the man were all recommended for a Commissioner's Commendation and will receive their certificates this week at New Scotland Yard.

Fofanah will be sentenced next month at Woolwich Crown Court.

On the afternoon of Thursday 25 July 2013 Al-Fodday Fofanah, who was on day release from prison, visited Barclays Bank on Borough High Street. He joined the queue and waited to be served. Fofanah was carrying a large bag and concealed his face with a sheet of paper.

In a twist of fate the customer in front of Fofanah was off duty police officer Commander Adrian Hanstock from the Safer Transport Command.

On his turn to be served Fofanah pulled a stocking over his face and took an assault rifle from the bag which he aimed at the cashier whilst demanding money.

Frightened and fearing for their lives a number of customers in the bank ran out into the street. The cashier dived behind the counter as Fofanah waved the weapon at the other cashiers again demanding cash.

When Fofanah realised no money was forthcoming he walked out of the bank with the gun in the bag.

Commander Hanstock, who had already left the bank, was confronted by the fleeing suspect and tried to call for police assistance.

Whilst following him they saw a Transit van driven by roofer John Girton. The van mounted the pavement and pulled up in front of Fofanah.

Mr Girton and his colleague Errol Gray had seen Fofanah leaving the bank and – presuming it was a terrorist incident – decided to apprehend him.

The van knocked Fofanah down and he was forced to flee down a nearby alleyway. As he ran off he aimed the gun at the van.

Mr Girton and Mr Gray got out of their vehicle and followed the suspect through a series of alleys into St Thomas Street.

An ice cream vendor who was parked in St Thomas Street saw Fofanah being chased by the two men. As Fofanah attempted to flee he was knocked to the ground by an unknown pedestrian.

He got up and took the rifle from the bag and waved it around at waist height to warn off his pursuers. The ice cream man left his van and chased Fofanah into Great Maze Pond.

A security manager at Guy's Hospital was patrolling in the area when he saw Fofanah being chased by the ice cream man and fellow hospital security officer Daniel Simons.

The security manager blocked Fofanah's path at which he took the rifle out of the bag.

The security manager grabbed the barrel and pointed it at the ground and pushed Fofanah back onto some railings. At this point he was joined by the ice cream man and Mr Simons who assisted him in detaining him

The three men were able to disarm Fofanah and held him on the ground until police arrived on scene and arrested him.

Following an examination, the weapon was found to be a deactivated assault rifle, classified as an imitation firearm.

Further investigation by detectives from the Flying Squad unearthed a second attempted robbery by Fofnah on 18 July 2013 at Santander Bank on Walworth Road.

"A number of people assisted with detaining Fofanah following the attempted armed robbery and without their help there is every possibility that he may have got away," said Detective Chief Inspector Paul Johnson of the Flying Squad.

"I would like to thank the members of the public who demonstrated an enormous amount of bravery in confronting Fofanah especially those who showed little fear in tackling him to the ground and keeping hold of him until police arrived.

"Fofanah has now admitted that he was responsible for not only this but another attempted robbery and we hope that he will now be handed down a significant sentence."