Happy Days at the Young Vic 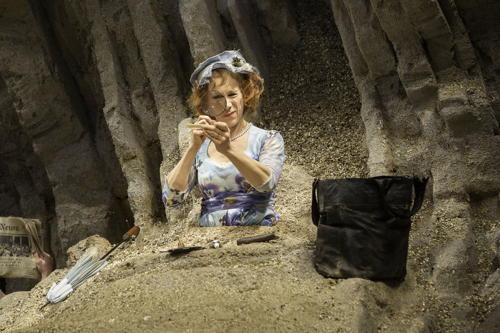 There are likely a number of reasons why Samuel Beckett's Happy Days is not often staged. Many actresses may not fancy the physical challenge of being buried up to their waist – and then up to their neck – on stage. And many audiences may not fancy paying to see it.

Yet when the acting is as good as Juliet Stevenson is, and when the direction is as well executed as it is by Natalie Abrahami, challenging or confusing are no longer credible excuses to avoid the play.

Stevenson is perfectly cast as the put-upon and trapped, yet ever smiling, stoic Winnie. Her sunny optimism is so clearly a fragile faēade despite her reminders to herself that she "mustn't complain". She copes with her desperate situation by following a monotonous routine and displays OCD-like tendencies as she clings to the limited comfort she can find in her few belongings. Her struggle to retain femininity is tragically summed up by her line "My looking glass doesn't need me".

David Beames is, I'm sure, also an excellent actor but it is almost impossible to tell thanks to Beckett's creation of Willie as a man of few words and even less charm. Winnie is desperate for affection, or simply attention, from her husband – yet receives none. The tragicomedy is compounded by the fact that Willie seems as isolated and as unhappy as Winnie but neither is able to comfort one another.

Stevenson appears magnificent atop her mound. She is bathed in an unrelentingly bright light throughout and subjected to periodic blasts of white noise, each one of which causes a look of horror to pass momentarily across her face. My tip is to arrive early, fifteen minutes or so before the play is due to begin, to see Winnie as she is unveiled on stage. She lies there, resting her head, perfectly still as the theatre fills up around her. Uncomplaining as ever.