Other Desert Cities at The Old Vic

Other Desert Cities at The Old Vic is the first of a series of productions to offer a more intimate experience than the theatre's proscenium arch usually affords. 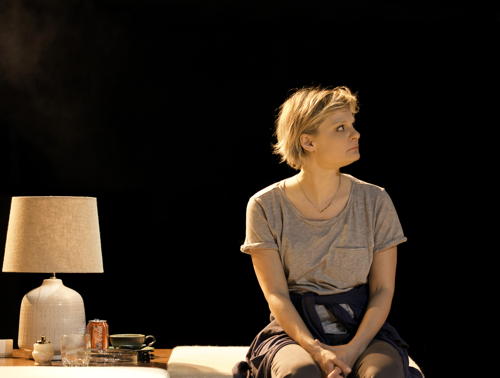 The 196-year-old theatre has for the second time in six years been reconfigured as a theatre in the round. It is worth seeing this production if only to also see how the round as been achieved and experience looking at the traditional interior from new angles.

Kevin Spacey says that Other Desert Cities demands that you don't take your eyes off the actors and the minimalist stage brought out into the auditorium allows for such concentration.

The award-winning play by American Jon Robin Baitz is set in the home of two comfortable and retired public figures in Palm Springs California at just before Christmas 2003. The US establishment was still reeling from the 9/11 attack on New York which is maybe why the original Broadway production received such attention as well as acclaim .

Peter Egan, as the Hollywood star turned Republican politician, gives a superb performance. Egan once familiar on television has moved seamlessly and successfully back to The Old Vic stage.

Sinead Cusack glides on stage as an unmistakable Republican fundraiser from the Nancy Reagan circle before we even hear her American accent.

Martha Plimpton, making her West End debut, has the advantage of being American as she takes on the role of loved but difficult and troubled daughter back home from the big city of New York. Her character Brooke is vital to the story and demands long periods of energetic action on stage.

Clare Higgins, seen regularly at the National Theatre, and now making her Old Vic debut as Brooke's alcoholic aunt Silda, and Daniel Lapaine, as the couple's son Trip, are required to move more slowly as they fill in for us the real picture of life in sunny retirement.

This is a study of family and American conflict which at times is difficult to watch. Baitz depicts two generations and a nation in various levels of denial. Although certainly not a comedy there some lines, well-delivered by Clare Higgins, which bring laughter and release tension.

A brief final act set in 2010 does not work well. Maybe it is not always necessary to tie up all the ends when a play is good. Families do not often manage to solve all conflicts and contradictions.