A View from the Bridge at the Young Vic

One of Arthur Miller's greatest plays retains its power through the outstanding performance of the actor at the heart of its story. 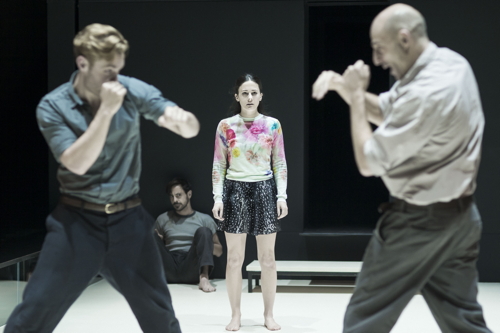 Love. Lust. Family. Always a potent mix; in the hands of Arthur Miller, it is a devastating combination. Built on the blind hope of the immigrants who flooded to New York City and their clash with the reality experienced by the generations who had come before then, 'A View from the Bridge' is about a city and its people. Yet strip this all away and the play is about one man and his struggle and eventual failure to escape who he is.

Mark Strong as Eddie Carbone is outstanding. This is Strong's return to the stage after 12 years of absence and he dominates completely, successfully inhabiting Miller's carefully crafted antihero who wishes to do the right thing in life but does not know how to. If this were a film, the camera would constantly be drawn to him. This is not to suggest that the rest of the cast are anything other than excellent. In particular Nicola Walker does well to make Beatrice, Eddie's wife, more than a secondary character. If one criticism were to be found, Phoebe Fox plays Eddie's niece Catherine more provocatively than Miller's original creation, making her slightly too knowing to not comprehend the drama unfolding around her.

The staging in Ivo van Hove's production is unexpected. Much of the play takes place in a domestic setting, yet the Young Vic's stage is bleak and bare. But then the area, Red Hook in Brooklyn, was defined by its industry, the docks, the lifeblood of the neighbourhood. By stripping away everything other than the actors themselves, van Hove exposes their souls. I question though whether the director has unwisely exaggerated the dark comic moments of the play. The scene in which Marco lifts a chair with one hand to prove his physical dominance over Eddie feels misjudged given the laughs it generates, masking the tension that hangs heavy in the air.

It is a bloody end, (almost) quite literally. This could be viewed as a cheap gimmick but shouldn't be. It leaves a vivid memory which is hard to erase days afterwards.