A male cyclist has been killed in a collision with a lorry at the Elephant & Castle. 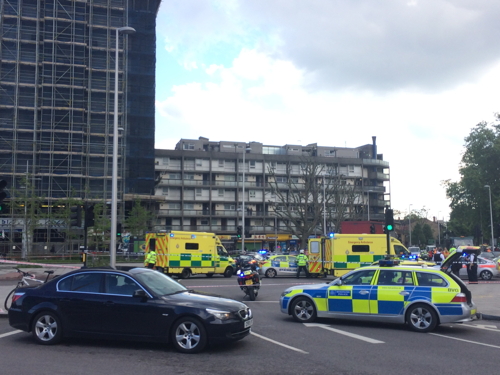 Police were called to the junction of Newington Butts and Walworth Road at Elephant & Castle just after 4pm on Tuesday.

When they arrived, officers found a cyclist – a man aged 47 – suffering from serious injuries following a collision with a heavy goods vehicle.

The London Ambulance Service and the air ambulance were called to the incident but the male cyclist died at the scene.

The driver of the HGV, a man aged 49, stopped at the scene. He was later arrested on suspicion of causing death by careless driving and taken into custody at a south London police station where he remains.

Detectives from the Serious Collision Investigation Unit at Catford Traffic Garage are carrying out inquiries into the circumstances of the incident.

Any witnesses or anyone with information that could assist police is asked to call 020 8285 1574.

The collision occurred at the Elephant & Castle's southern roundabout which was the subject of major works to remove the previous roundabout and subway system in 2010.

Public consultation ended last month on plans for a major reconfiguration of the northern roundabout.