A 'topping out' ceremony has been held on the roof of a new hotel under construction in Great Suffolk Street. 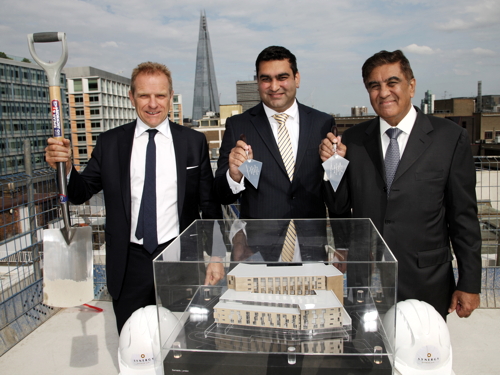 Work first began on the Hilton London Bankside four years ago, but after a lengthy pause construction resumed eleven months ago.

Now the concrete frame has reached its full height and work will continue for another year to fit out the new hotel.

When it opens next summer, the hotel will have 292 guest rooms, a swimming pool and an opulent ballroom with capacity for 700 guests. Nearly 200 jobs will be created at the hotel.

"My first investment in the London Borough of Southwark was nearly 20 years ago when I purchased an office building to convert to a limited service hotel," said Shiraz Boghani, chairman of Synergy Hotels, the firm behind the new Hilton.

"At the time, two major UK banks thought I needed to have my head examined, as nobody was investing in the south bank area. Nevertheless, I persevered with the plan and opened the second Holiday Inn Express in London. It was an overnight success."

Boghani added that when he sold the Holiday Inn Express London Southwark four years ago, it was the best performing hotel under that brand in Europe, the Middle East and Africa.

Simon Vincent of Hilton Worldwide said he hoped that the Hilton London Bankside would become "one of London's leading hotels".

The new hotel was designed by Dexter Moren Associates who were also responsible for the nearby Travelodge London Southwark.