Several people were injured when a Thames pleasure boat and a tug hauling barges loaded with containers of waste collided near Oxo Tower Wharf. 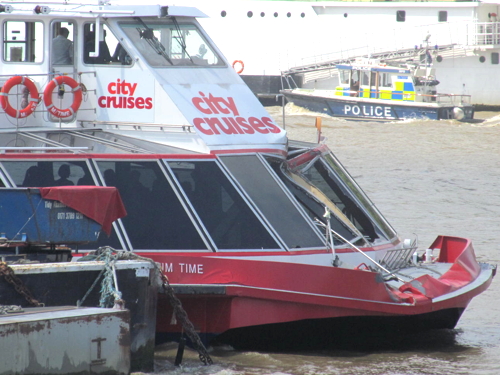 The damaged bow of the Millennium Time 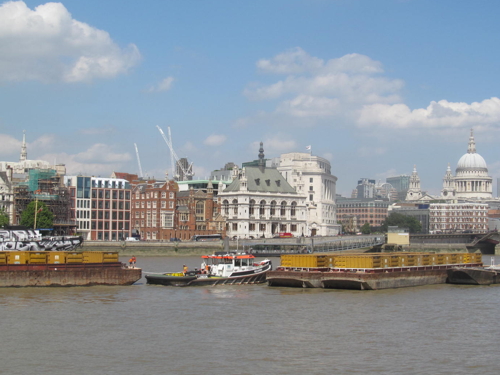 Cory's barges involved in the incident were towed to nearby moorings

The emergency services were called to the scene in King's Reach, between Waterloo Bridge and Blackfriars Bridge, at 2.15pm on Thursday.

The Metropolitan Police's marine support unit, Coastguard, London Fire Brigade and London Ambulance Service all responded to the incident, along with the RNLI.

"At this stage there are believed to be a small number of people with minor injuries including cuts and whiplash," said a polices spokesman.

"Nobody from either vessel entered the water following the collision, and neither boat is believed to be at risk of sinking."

The London Ambulance Service said that its staff had treated several people at the scene for minor injuries.

RNLI helmsman Steve King said: "We arrived on scene and saw the front of the passenger boat was pretty crunched up. As soon as we arrived I came alongside and put my crew aboard the boat so they could assess the needs of those on board.

"People were understandably somewhat shaken by what had happened. Nine people suffered minor injuries including a young boy with cuts to his shin and a lady with a swollen knee.

"The injured people were treated and then taken along with the rest of the passengers to Festival Pier, where London Ambulance Service paramedics were waiting.

"This kind of thing isn't an everyday occurrence on the River Thames but it is something we train for, as we do for all eventualities and emergencies.

"I am pleased we were able to get there so quickly and give assistance."

The bow of the pleasure boat Millennium Time operated by City Cruises was damaged in the collision with a tug and barges operated by Cory Environmental.

Cory has a fleet of barges which carry containerised waste along the river.

It is the second time in six weeks that a City Cruises vessel has been involved in a major incident. In June, the Millennium Diamond collided with Tower Bridge.

Next month is the 25th anniversary of the Marchioness disaster which led to a number of improvements to river safety.