A Streetcar Named Desire at the Young Vic

A confident, standout version of Streetcar. 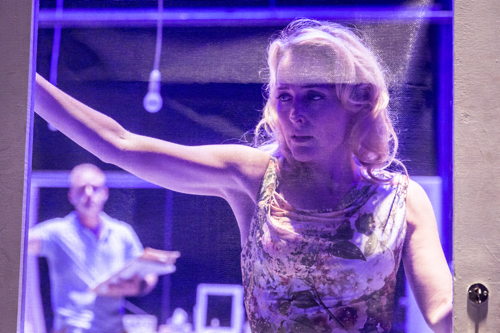 As sure as night becomes day, A Streetcar Named Desire will return to the London stage every two or three years.

This incarnation is the fastest selling play in the Young Vic’s history, success which cannot simply be attributed to Gillian Anderson’s pulling power, as strong as that is; other names as big as hers have trodden the boards at the Young Vic in recent years – including Michael Sheen and Sir Patrick Stewart.

There is something about Streetcar which resonates through the ages; Blanche, Stanley and Stella leave an enduring impression on those who encounter them, leaving audiences desiring to see them perform again and actors aspiring to play them.

Blanche DuBois is up there with the greatest theatrical characters of all time. The role is demanding of all of the actors that play her; three hours plus as a character who is so emotionally damaged her inevitable demise is apparent from her first steps on stage. Gillian Anderson embodies the role of Blanche – she looks, sounds and is the part.

She is at her very best during the scene in which she seduces a young boy, where her comic timing and sexual appeal is potent. Perversely, Anderson perhaps goes too far in embodying the role; her performance is at times a little bit overwrought and some of her words are unintentionally lost as a result. Even when playing Blanche DuBois it is possible to be too hysterical.

It is the actors that play the male characters who deliver the most convincing and nuanced performances. Ben Foster has a take on Stanley that is rarely seen on stage; his Stanley is more vulnerable than menacing, a counter- Balance to Marlon Brando’s memorable performance. Corey Johnson does not allow Mitch to be eclipsed by the play’s more dramatic characters; his desire to protect Blanche, and his heartbreak when he realises she is beyond help, is palpable.

It is hardly novel for plays to be taken out of their original setting; you can reference any number of Shakespeare’s works. Oddly much has been made of Benedict Andrews’ decision to set his version of Streetcar not in its original postwar setting but instead on a set that is devoid of any period details.

What is more notable about Andrews’ direction is his decision to not only set it in the round but to also set it on a rotating stage, with the speed varying depending on the tempo of the action. To begin with it spins so slowly it appears to be a trick of the mind but the speed picks up as it mirrors Blanche’s descent. This is a novelty, but it works – the constant sense of movement reflects the pace of the play and the sense that it is set in a world that is rapidly changing.

On 16 September, A Streetcar Named Desire will be broadcast live to over 1000 cinemas worldwide by National Theatre Live.