Six young people trained by a Kennington-based charity were employed as marshals on a film set in Waterloo last month. 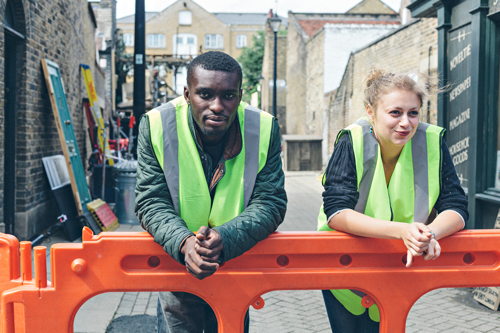 When the makers of Legend – a new movie about the Kray twins – descended on Waterloo last month, some of the marshals controlling access to the film sets in Roupell Street and Whittlesey Street had been part of a local training scheme.

"When the trainees were referred to us, none of them was in employment, education, or training," said
Sylvia Edwards, chief executive of Kennington-based charity Creative Sparkworks.

Six of the group worked as marshals on the Legend shoot in July.

Cllr Jack Hopkins, Lambeth's cabinet member for jobs and growth, said: "Too often people break in to the film industry only because they have the resources to accept unpaid intern jobs to gain experience. It's not fair on those who cannot afford to work for nothing.

"We at Lambeth Council will continue to work hard to connect professional film companies with local young people.

"It is very hard for young people to get a start in the film industry, you need experience to get a job. It's catch 22. I'm pleased that our film service insists that local people are trained and employed by filmmakers using our locations.

"These young people now have a big name movie on their CVs, so they will be taken seriously when they apply for jobs in the future."

Ms Edwards added: "The key to this success was a core aim to move our trainees into paid employment. I cannot emphasise enough how important this was.

"As soon as our young people received Ł100 and upwards for a day's work in the film business, that was the turning point for them. It's what motivated them to continue working hard."

The group of eight has formed its own production unit, is working regularly, and each one is looking forward to fresh prospects in the new academic year. These include a university place for film and business, entry to City & Guilds of London Art School, work directing three local documentary films from July to December, work filming and editing, a training programme for a youth charity, and entry to other further courses.

Ms Edwards said: "Very early on, FilmFixer arranged for filmmakers shooting in the borough to help us."

This began with asking the makers of Kingsman: The Secret Service, starring Samuel L. Jackson and Colin Firth, to make a donation enabling professional training and to invite trainees on set.

Ms Edwards says, "The trainers explained the realities of working your way up in the industry from the bottom. They brought along directors who had started as runners. It was very inspirational.

"There were set visits where they could see the production crew in action and there was a thorough grounding in the expectations of the profession.

"I'm not quite sure how, but now they've turned me into their Production Manager (on top of everything else I have to do) – although I have to say I enjoy their enthusiasm so much that I don't mind."