Police shut down Carriage 34 bar in Lower Marsh after stabbing

Lambeth Police used emergency powers to shut down the Carriage 34 bar after a man was stabbed at the Lower Marsh venue on Sunday morning. 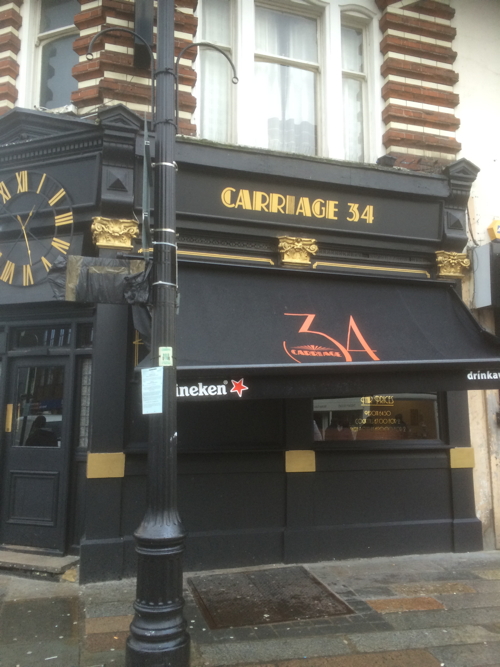 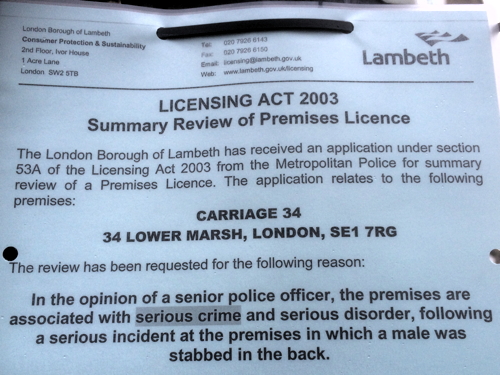 The closure notice was issued under section 76 of the Anti-Social Behaviour, Crime and Policing Act 2014.

Police were called to the Lower Marsh bar in the early hours of Sunday morning to what they describe as an "incident of serious disorder" during which a man was stabbed in the back.

Detective Superintendent Sean Oxley of Lambeth Police has now applied to Lambeth Council for an urgent review of the premises licence.

In his application to the council, Det Supt Oxley alleges that Carriage 34 was using bouncers who were not licenced by the Security Industry Authority, that bouncers tried to prevent police entering the venue, that staff at the bar tried to clear up the crime scene of the stabbing before officers intervened, and that staff tried to stop the police from viewing CCTV footage of the incident.

The police say that several other incidents have occurred at the venue, including disorder last October which led to an investigation into grievous bodily harm.

Det Supt Oxley also says that both Menelaos Aligizakis – murdered in Waterloo Road on Saturday 3 January – and his alleged attacker had been drinking in Carriage 34 before the incident.

"The Metropolitan Police contend that the premises is associated with serious crime and serious disorder, having failed to respond positively to previous interventions by the authorities," wrote Det Supt Oxley.

"People are being subject to serious incidents of crime and being harmed, which is totally unacceptable.

"The seriousness of the incidents occurring at the premises are such that the Metropolitan Police advise there are no measures which can be put in place to protect public safety and therefore request that as an interim measure the premises licence be suspended pending a full review of the premises licence."

The police's application to suspend the licence will be considered by councillors at Lambeth town hall on Tuesday evening.

Rajan Bhanot, designated premises supervisor at Carriage 34, wrote to Lambeth Police on Monday with his side of the story.

"Once ejected they became extremely aggressive and tried to 'break their way back in' using what looked like a belt and their fists.

"When I saw how volatile the situation had become I was the first to call 999 to ensure the police knew exactly what was happening, how many patrons were inside and the general situation etc.

"Whilst this wasn't a serious incident at all I recognise I could have been (given they had the propensity to be so violent!) and as the person responsible for upholding the licensing objectives these types of 'hip-hop and afro-beats' parties cannot continue."

Mr Bhanot goes on to say that he has cancelled all private hire events at the venue indefinitely.

"You will not visit us again to find an event that even requires crowd control barriers."