Parliament celebrated its 750th birthday on Monday with a metre-long cake created by the National Bakery School at London South Bank University. 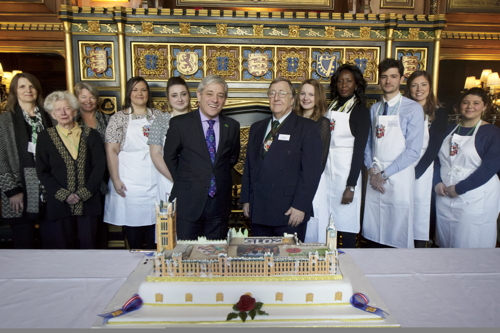 The giant three tier fruit cake in the shape of the Palace of Westminster was presented to the House of Commons by the City of London's Worshipful Company of Bakers.

The gift marked the 750th anniversary of Simon de Montfort's parliament (20 January 1265), which is widely recognised as the beginning of the House of Commons.

"We have worked extremely hard to design and create a cake which really emulates this momentous occasion in a way that was both celebratory and fun," said Dr John Marchant, head of the National Bakery School.

"We are honoured to have been given the chance to commemorate such a significant milestone for the nation and hope our cake really encapsulated the importance of this special day."

Representatives of the Worshipful Company of Bakers, the City of London and Parliament were at the presentation, along with the students from the National Bakery School and pupils from Sir John Cass Primary School in the City.

The National Bakery School was established in 1894 at the Borough Polytechnic Institute – now London South Bank University – and has created special cakes for a number of important national occasions.