An ecumenical twinning agreement between Southwark and Rouen cathedrals has been reaffirmed by a new generation with a signing ceremony at Southwark Cathedral. 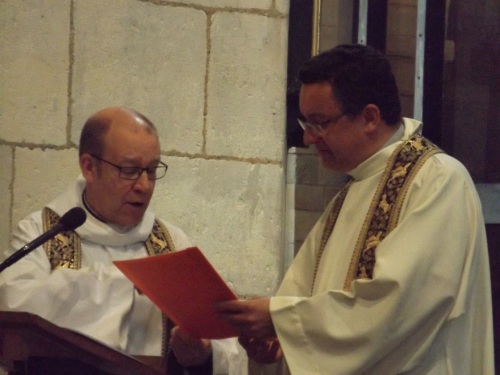 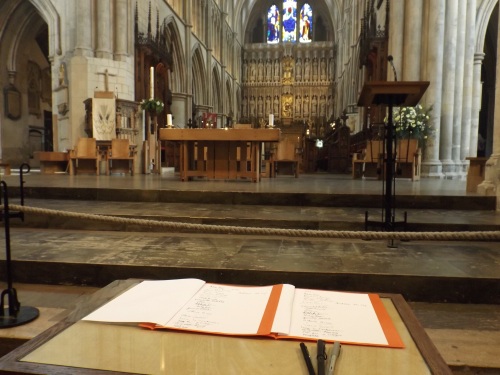 The agreement displayed in Southwark Cathedral on Sunday 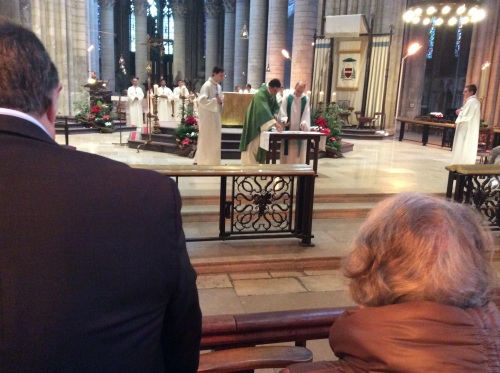 The agreement being signed in Rouen Cathedral in January

This follows a similar ceremony in Rouen earlier this year.

The revised written agreement sees Southwark Anglicans and Rouen Roman Catholics again committing to prayer and friendship and to working together for the greater Christian unity.

Rouen's dean Pčre Christophe Potel, preaching at Southwark Cathedral on Sunday morning, said that in the Easter period there was a state of great expectation and hope.

It was twenty years since the Southwark-Rouen relationship began.

"In Rouen it has got meaning. To express our own commendable desire to go forward we have decided to renew our ecumenical agreement.

"We are pleased to be here today and sign it in your presence."

Having quoted from the seven point agreement recalling Christ's desire for unity, he concluded: "May he help us to walk in the unity that he wishes for us by his daily and constant presence with us."

The Dean of Southwark, the Very Revd Andrew Nunn, said that the agreement was an important part of the story of Southwark Cathedral in recent years.

"It's so important that we have a real relationship as we struggle through issues that we recognise still divide us but also we recognise the need to respond to the Lord's call to us that we be one."

Earlier in the service, Jacqueline Prevost from Rouen read in French the first Bible passage for the day.

St Olaf in Rouen and Southwark

In 1014 Norwegian prince Olaf Haraldsson, or Olaf The Fat, sailed up the River Thames and pulled down the wooden London Bridge. He was supporting Ethelred the Unready who had been under attack from Sweyn Forkbeard and his Danish troops who held the bridge.

The dramatic incident may have given rise to the nursery rhyme London Bridge is Falling Down.

Afterwards Olaf, now known in Norway as 'Olaf The Holy', sailed downstream and across the English Channel to spend the autumn with the Duke of Normandy. Whilst in Normandy, Olaf was baptised in Rouen Cathedral.

St Olaf House in Tooley Street stands on the site of St Olave's Church. 'Tooley' is a corruption of 'Saint Olaf'.

A turret survives in Tanner Street Park which was opened with money raised by selling the church site.

Other Olaf connections include St Saviour's & St Olave's School at the Bricklayers Arms and the Norwegian church of St Olav in Rotherhithe's St Olav Square.

Southwark has presented Rouen Cathedral with a framed image by Richard Miller of Olaf as depicted on St Olaf House.