A survivor of the 7 July 2005 London bombings has returned to St Thomas' Hospital to visit the staff who cared for her ten years ago. 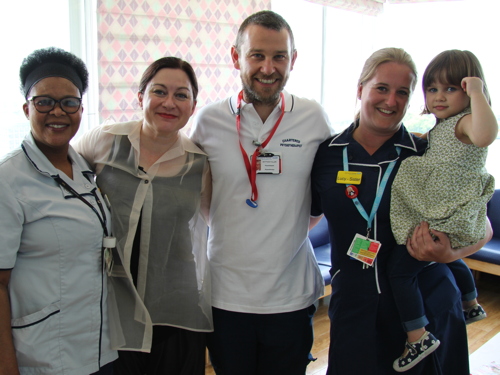 Gill Hicks had both her legs amputated after being severely injured on 7/7. Over the course of three months she learned to walk again using prosthetic limbs.

Accompanied by her two-year-old daughter Amelie, Gill met Dame Eileen Sills, chief nurse at Guy's and St Thomas', who was one of the first people Gill saw when she regained consciousness.

She then visited Luke Ward where she had spent months recovering. Gill was overjoyed to find physiotherapist Matthew Fuller, nurse Lucy Ford, and senior nursing assistant Fatima Eretusi, waiting for her in the ward. All three were instrumental to her care back in 2005.

Gill Hicks said: "St Thomas' is the final place where my life was saved on 7/7. The decisions made by the health professionals here determined my future. I wasn't expected to survive when I was brought in, but three months later I walked out and started my second life.

"The staff who cared for me are gorgeous, wonderful people and I'll always be grateful for what they did."

Dame Eileen Sills said: "We were thrilled to welcome Gill back to St Thomas' so that she could catch up with the staff who worked with her in 2005.

"7/7 was a terrible day that none of us will ever forget. To see a patient like Gill 10 years later, with all her optimism and enthusiasm for life after everything she's been through, is absolutely inspirational."

Following her recovery, Gill established the charity MAD (Making a Difference) for Peace and works through public engagement and education to encourage greater understanding and willingness to resolve conflict and division.

Having moved back to her native Australia in 2013, Gill has been undertaking 10 challenges to mark 10 years since 7/7. She returned to London to complete a sponsored abseiling challenge fundraising for Guy's and St Thomas' and to participate in events marking the anniversary.