Construction of a long-awaited new school in Bermondsey got under way last week when a ground-breaking ceremony was held in Paterson Park. 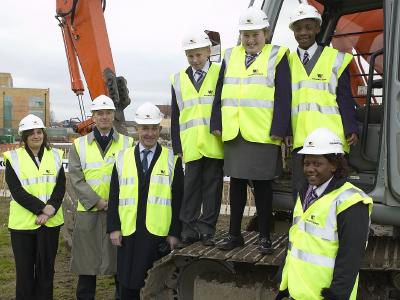 Students from the Corporation of London-backed City Academy, accompanied by new principal Martyn Coles, William Fraser, chairman of the academy's board of governors and Southwark Council leader Nick Stanton, were shown where the top-class school buildings and sports facilities will be built by construction company Willmott Dixon.

Currently based at a temporary site in Peckham Rye, the City Academy opened to 180 Year 7 pupils from Southwark and the City of London in September 2003.  The Academy, sponsored by Ł2 million from the Corporation of London, will eventually teach 1,200 pupils aged 11-19.  It will move into the completed buildings at Paterson Park in September 2005.

"It is very exciting to see building work under way at the site" said William Fraser, chairman of governors and a member of the Corporation of London's education committee. "The Academy will provide a centre of academic excellence and will be a real benefit for the children and communities in Southwark and the City of London."