There were twelve participants at the inaugural meeting of SE1's RSA Coffeehouse Challenge at Starbucks in St Thomas Street. 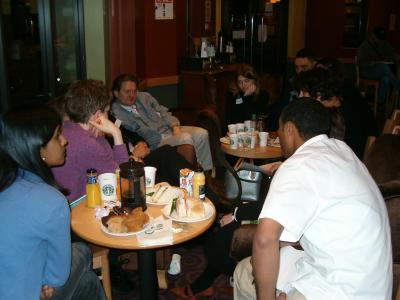 A lively discussion around the topic of reducing all forms of waste in SE1 and Southwark indicated general enthusiasm for a project to 'green' Southwark businesses.

This first Challenge debate took place 250 years to the day since the Royal Society of Arts was founded in a Covent Garden coffee house.

Hours earlier the Duke of Edinburgh, the Society's president, had chaired a similar discussion at the RSA building in John Adam Street near Charing Cross. Others were held at a hundred other loactions nationwide.

The SE1 series of Coffeehouse Challenge meetings will rotate round the various Starbucks in the area.

• The next SE1 Coffeehouse Challenge meeting is at Starbucks in the Hayward Gallery on Monday 29 March at 6pm when the discussion will focus on the role of art in education.  It will be facilitated by RSA fellow Ido Ben-Shaul.  Everyone is welcome.

• The final Coffeehouse Challenge conference event will be at the Royal Albert Hall on Monday 11 October.