A team of firefighters from RAF Northolt abseiled down the Union Jack Club building in Waterloo. 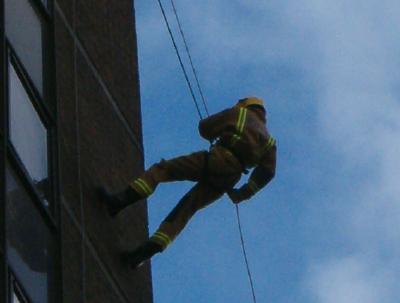 The event, marking the 60th anniversary of The Great Escape, was in aid of children's charity Childhood First, part of the Peper Harow Foundation. The charity is based above the Fire Station bar in Waterloo Road.

The firemen, who were sponsored and dressed as firefighters, abseiled down the ten-storey western wing on the corner of Sandell Street and Cornwall Road. The firemen are hoping to present a cheque to the charity within a few days.

The Northolt firefighters were joined by other volunteers each raising Ł50 to boost the charity's funds.