The battle between the two daytime TV magazine programmes produced on the South Bank came to an end on Friday with the final edition of Five&#39;s Terry and Gaby Show, live from County Hall. 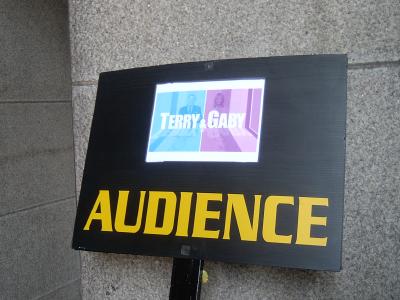 Terry Wogan and Gaby Roslin's daily magazine show was broadcast from a studio on the third floor of County Hall, above the Saatchi Gallery, with the Houses of Parliament providing the backdrop.

The show faced tough competition from ITV1's established This Morning show, presented by Philip Schofield and Fern Britton from the nearby London Television Centre in Upper Ground.

Five commissioned 100 editions of the Terry and Gaby Show – which launched in June 2003 – from Chris Evans' production company.

Chris Evans was so certain that the daytime TV show would revive his flagging career that he vowed to become a market trader if the show was a flop. As the credits rolled at the end of the final show, Evans was shown serving at a market fruit and veg stall. His final words: "F**• it, we gave it a go, didn't we?"