Inmates from a young offenders' institute have created a mural to be displayed at Southwark Station as part of a London Underground community project. 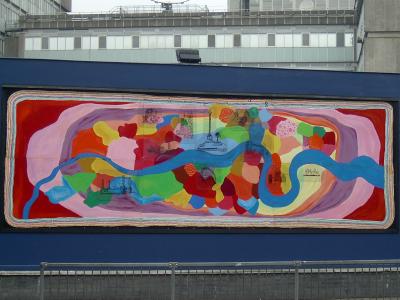 Sixty inmates the Feltham Young Offenders' Institute have created the seven-metre long mural which will be on show in The Cut for three months.

The 15 to 18 year-olds have created a map of London, including geographical features and well-known landmarks, using the opportunity to express themselves, display their talents and challenge stereotypes about young offenders.

The aim of the Creative Communities Programme – an extension of Platform for Art – was to promote young creative talent and is commissioned Feltham's art department to contribute a mural.

"The feedback from Feltham and from the boys themselves has been fantastic" says Victoria Jones, London Underground's community arts producer. "We are very proud to showcase this mural and hopefully encourage some very talented young men to pursue artistic careers. 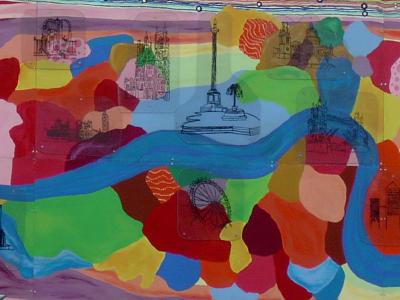 "The project has also been very well received by our station staff, particularly Chris Ntende, who contributed to the original idea in the first place. He talked to the young men about LU and the Platform for Art Creative Communities Programme."

Iona Paterson, creative studies team leader at Feltham, said: "Prison is a very inward-looking world, separate from society. Projects such as this help build positive links with community and give something back.

"The art works as a vehicle to build self-esteem and communications skills. This project has given young people at Feltham an opportunity to have their artwork seen and recognised by a greater audience."

Creative Communities was devised in August 2003 in a bid to work with diverse communities, championing excellence and creativity in all areas of London.

The mural fills a blank wall on The Cut side of Southwark Station which was previously filled by a Rolf Harris painting.