Detectives have released an image of a man they wish to speak to after an incident at London Bridge tube station which left the victim with a broken nose. 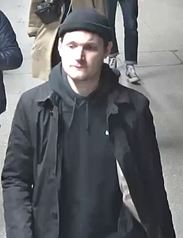 The incident happened on Saturday 4 February at 7.15pm.

The victim, a 26-year-old man, had engaged in conversation with another man on the tube train. As the train arrived at London Bridge the man got up and kicked the victim in the face.

The force of the kick broke the victim's nose. The man then left the tube train at London Bridge.

Investigating officer DC Denis Mahony said: "I am keen to speak to the man in the CCTV image as I believe he holds vital information to the incident.

"The victim was so badly kicked in the nose that he has had to undergo significant medical treatment to reset the broken nose.

"Nobody should have to experience this kind of behaviour and the person responsible should be brought to justice."