An ecumenical gathering to mark the 500th anniversary of the Reformation has been held at St George's Roman Catholic Cathedral. 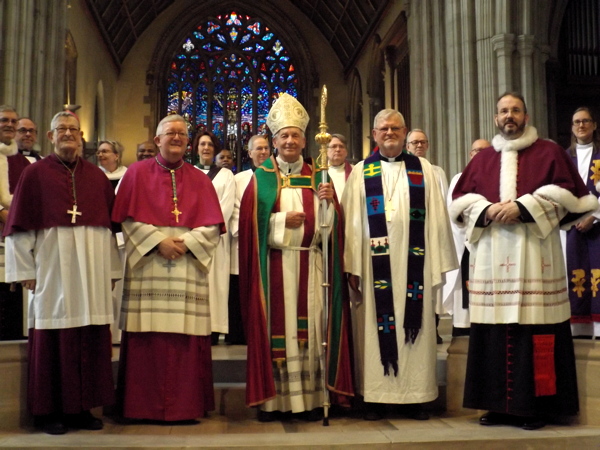 A Lutheran-Catholic Common Commemoration in the form of a special service of Vespers took place on Sunday afternoon.

"For over fifty years Lutherans and Catholics have been on a journey from conflict to communion," said the Rt Revd Dr Martin Lind, Bishop of the Lutheran Church in Great Britain.

"With joy we have come to recognise that what unites us is far greater than what divides us. On this journey, mutual understanding and trust have grown."

The Most Revd Bernard Longley, Archbishop of Birmingham, added: "We come with different thoughts and feelings: thanksgiving and repentance, joy in the Gospel and sorrow for division.

"We gather in remembrance, in thanksgiving and confession, and in common witness and commitment"

Before the service began, dean of St George's Cathedral Canon Richard Hearn, recalled the early days of his church in Southwark when there was an anti-Catholic riot on St George's Fields.

The Archbishop of Southwark, the Most Revd Peter Smith, presided and welcomed the congregation from across London.

The Anglican Southwark Cathedral was represented by Dean of Southwark the Very Revd Andrew Nunn and Canon Mandy Ford.

Also present in the sanctuary were the Revd Torbjorn Holt from the Norwegian Church at Rotherhithe, who is chair of the Council of Lutheran Churches, and Canon Alan McLean, parish priest of Holy Trinity Dockhead which will be hosting the final service of remembrance and fellowship in December.

The actual anniversary of Martin Luther sparking the Reformation is Hallowe'en Tuesday 31 October when there will be a service in Westminster Abbey.