Plans to add a two-storey extension to the Accommodation London Bridge hotel in Great Dover Street have been approved by Southwark councillors. 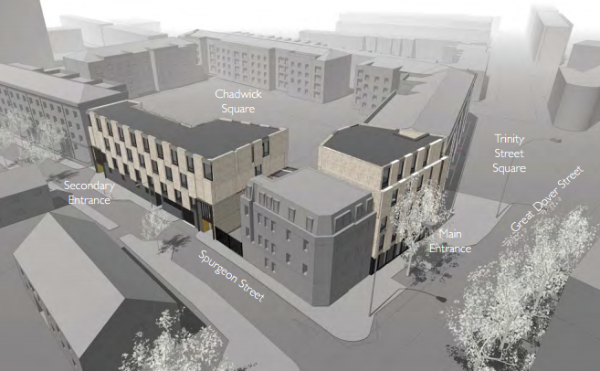 The site at the corner of Great Dover Street and Spurgeon Street – with Sainsbury's Local on the ground floor – has a lengthy and complicated planning history.

Council officers issued an enforcement notice in 2012 when the hotel opened without planning permission. The following year the hotel use was regularised when councillors approved a planning application.

Under the latest plans – drawn up by Satellite Architects – the owners of Accommodation London Bridge want to add two storeys to the existing two and three-storey building, giving the hotel an extra 18 apart-hotel studios.

Southwark's planning sub-committee A voted unanimously that planning permission should be granted.

Planning officer Alex Cameron explained that the council had received a total of 75 objections to the proposal – many from residents of the adjacent Chadwick Square – citing loss of privacy, overlooking and other issues.

Mr Cameron welcomed the design of the scheme: "The existing building is of very little architectural merit and officers are of the opinion that the additional cladding will be a significant improvement," he said, noting that it would be "a positive addition to the street scene".

A Chadwick Square resident addressed the meeting to raise "considerable planning concerns" about the scheme including overlooking and the risk of noise nuisance.

Architect Lauren Bennett told councillors that the existing building is "inadequate" and her scheme would offer a "much-needed uplift" to the current hotel.

She explained that her design used traditional masonry materials in a modern way, and that the scheme presented to councillors was the product of dialogue with council planning officers.

Chaucer ward councillor Karl Eastham addressed the sub-committee to highlight the owners' history of "acting in an un-neighbourly way".

He put forward concerns about refuse collection and late-night noise and called for a design that was "more sympathetic" to the neo-Georgian context of Chadwick Square.

Sub-committee chair Leo Pollak noted that this was an "applicant with a bit of a chequered history" but welcomed the changes made to the planning application since it was first submitted.