LSBU at 125: call for alumni and staff to share memories

London South Bank University (LSBU) is calling for all the extended members of the university family to come forward and share their memories and reminiscences as part of a project to celebrate the institution's 125th birthday. 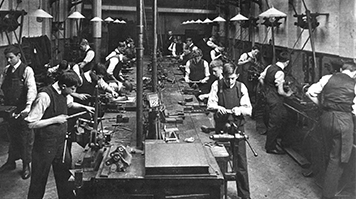 The university, which was founded as Borough Polytechnic Institute in 1892, wants to hear from past and present students, staff and LSBU community members to inform a creative record of the influence of the university in the years since its inception.

LSBU vice-chancellor Professor David Phoenix said: "We have a number of events planned throughout the year to celebrate the anniversary, however LSBU would be nothing without the individuals who have contributed over the many years to our institution, be it as a student, in a staff role or the wider community.

"Now is a great opportunity to reach out and reconnect with people who have equally influenced, and been influenced by, LSBU in some way so that we can honour and appreciate our history and how we have grown over the past 125 years."

One letter provided to LSBU shared the story of a man who began study in 1938 at the "Boro' Poly", aged 14, in steam engineering:

"I left London in 1962, but in the intervening years gave back to the polytechnic by lecturing at evening classes and still feel the warmth of having enjoyed my engineering based on sound teaching."

In another letter, a former student described their career spanning interesting and varied titles such as fighter pilot, weather forecaster, teacher and inventor as "achieved from a grounding at the Borough Polytechnic, now LSBU".

• Has LSBU had an impact on your life? Email [email protected] or send letters to Press team, Marketing and Communications, LSBU, 103 Borough Road, London SE1 0AA.