It's exactly 150 years since Queen Victoria visited Lambeth to lay the foundation stone for the new St Thomas' Hospital on the South Bank of the Thames. 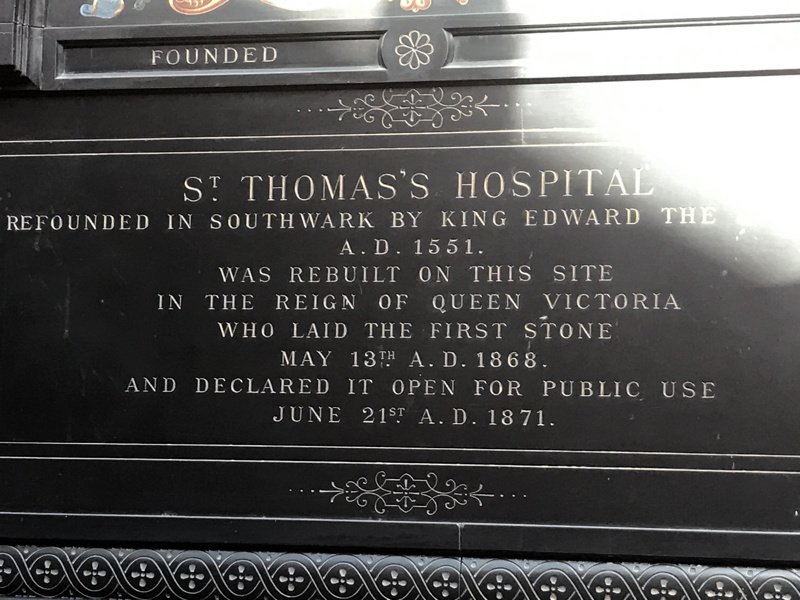 St Thomas' Hospital, which was founded in Southwark in the 12th century, was forced to make plans to relocate in the 1860s due to the extension of the railway westwards from London Bridge Station towards Charing Cross.

Options for the new St Thomas' included a site in Lewisham, or taking over the Bethlem Hospital site (now the Imperial War Museum), but ultimately a site at Stangate in Lambeth, owned by the Metropolitan Board of Works, won favour.

As The Times reported at the time, "such a commanding position, immediately facing the House of Parliament, and in a densely populated neighbourhood without any hospital accommodation near, very soon induced the governors to accept the offer on the proposed terms".

The new hospital was designed on the "pavilion principle" by Henry Currey.

A plaque recording the laying of the foundation stone by Queen Victoria on 13 May 1868 can now be found on the stairs leading up to Governors' Hall at St Thomas'.

The royal visit to St Thomas' was said to be the first time after the death of Prince Albert that the Queen had "been willing to appear publicly in London to inaugurate the commencement of a charitable institution".

The Queen arrived in Lambeth in a carriage procession from Buckingham Palace, escorted by a detachment of the Royal Horse Guards.

The laying of the foundation stone was an elaborate ceremony, with seating provided for nearly 3,000 people in a temporary pavilion.

In its detailed report of the day, The Times noted one lapse in the elaborate ceremonial when the prime minister, Benjamin Disraeli, was escorted to the wrong seat.

In her written response to the address of the hospital president, the Queen said that "I trust that your hospital, by the various improvements which experience and sanitary skill may suggest, will secure increased benefit to its suffering inmates, and provide an admirable school for nurses and for the promotion of medical and surgical science".

Although The Times was enthusiastic about the prospects for St Thomas' to become "one of the best adapted and finest structures of its kind in the kingdom", the paper had some cutting remarks about the section of riverside walkway in front of the new hospital site, noting that it "may be said to begin nowhere and end in nothing else".

Victoria returned to St Thomas' in 1871 to perform the official opening ceremony.

Parts of the old St Thomas' Hospital survive in Southwark, including the building which now houses the London Bridge Post Office in Borough High Street, as well as the Old Operating Theatre, Museum & Herb Garret.