SE1's MPs and senior police officers have insisted that people shouldn't be deterred from visiting the South Bank in the wake of the murder of David Morley on Saturday morning. A seventh arrest has now been made. 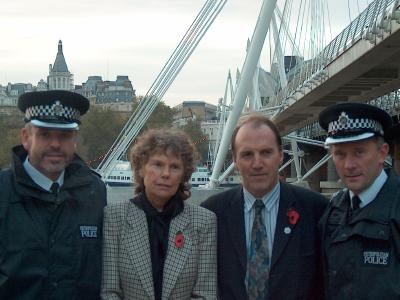 "We don't want people to think that they shouldn't come to the South Bank any more because of what happened and we're appealing to anyone who saw anything – or thinks about something they might have seen – during that two hour period to come forward because it's only by every individual saying what they know will we be able to piece together this terrible, tragic murder" said Vauxhall MP Kate Hoey, speaking at a special joint press conference on the South Bank ahead of Friday evening's memorial procession for David Morley.

Hoey insisted that the increased popularity of the South Bank in recent years has made the area safer rather than more dangerous: "Because it's actually got more people now coming through because of some of the big tourist attractions in many ways it should be a safer place because there are more people around, and there were plenty of people around at that time of night, and I don't think it's changed the nature that much.

"What it has meant is that we have managed to get some extra policing resources and extra money to go into lighting, we've got the bridges fixed, we've got CCTV now and if you compare here to what it was like when I was first elected this was a pretty awful place to walk along at night; no-one would probably have dared walk along, so it has changed a lot."

"The South Bank is a safe place to be" insisted Ian Thomas, Southwark's borough police commander. "We would see this as a one-off attack and wouldn't want to discourage anyone from using this area.

Lambeth's Commander Richard Quinn told the London SE1 website: "I'm concerned that there's a fear within the borough that you are likely to be a victim if you walk along the South Bank and especially if you are gay. The homophobic attacks and other forms of violence in this part of the borough are very low – and there is an increased presence of policing – but unless people come forward and report crime to me – and there is an element of underreporting among the gay community – and unless they do come forward and I get a true reflection of what's going on then I can actually tackle it rather than say, yeah, crime is low; it may well be high – we know in other parts of the borough it's extremely high."

He at pains to emphasise the isolated nature of Saturday's attacks: "This incident the other night was one group of teenagers attacking up to six people. Now that was one incident, involving one group. It's not a case of loads of attackers and multiple victims. This was very much isolated to one evening and that's what we need to keep in perspective."

Quinn also suggested that the South Bank's proximity to Westminster also has benefits in security terms: "I must remind people that there is an added security patrol in this area around the government security zone, so this does enjoy, in that sense, added policing."

Simon Hughes – whose North Southwark and Bermondsey constituency covers part of the South Bank – stressed the strong co-operation between authorities in Lambeth and Southwark: "We're here together because on South Bank issues Kate Hoey and I, the two police commanders, the two boroughs work together, all the time; we meet regularly, almost every month.

"The best security we have is that other people are around, and if we all do our jobs as citizens, keeping our eyes open, reporting things that are suspicious, acting when necessary, then hopefully the South Bank will be what it should be, a place where people from all over the world can come and be safe and happy, and residents and workers and tourists feel that they all are treated equally and with respect."

Within an hour of the press conference police announced a seventh arrest in connection with Saturday's events. On Thursday six people were arrested and are in custody at separate south London police stations. At approximately 12 noon on Friday another person was arrested in connection with the inquiry and is also in custody.

Police are refusing to discuss their sex and ages at present.