The third annual Elefest Film Festival got under way on Monday night at the London College of Communication. The programme of free movie screenings runs until Saturday. 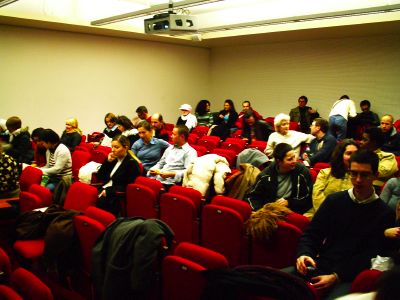 The London College of Communication is providing the setting for this year's festival. Previous Elefests have been based at the now closed Coronet on New Kent Road.

The festival opened with two short films made for Elefest by local people in a series of workshops held at the Into centre in Trinity Street. The first, Street Life, was an affectionate portrait of East Street market through the eyes of traders and shoppers of all ages and backgrounds. This film was followed by Postman's Revenge, a short comedy set on the Heygate Estate.

On Thursday seven short films made as part of Southwark Council's Get Scene film competition will get their first public screening. Followed by Maria Full of Grace – the award-winning story of a
17-year-old Columbian girl who struggles for survival on the margins of society and gets lured into becoming a drug mule.

As part of Friday's festival schedule, Southwark TV will present a special edition of their Southwark Hour programme for the Community Channel. Friday's highlight is the annual art event at Corsica Studios in Elephant Road, bringing together a diverse selection of artists, performers, musicians and filmmakers.

The festival concludes on Saturday 3 December with the 2001 film Last Orders, set in South London in 1989 and starring Michael Caine, Bob Hoskins, Ray Winston and Helen Mirren. The final screening is Pather Panchali, the first film to be directed by the now internationally respected director Satyajit Ray.

The full Elefest programme can be found on the NEON website.