Residents renewed their campaign against the Potters Fields development this week by setting fire to models of Berkeley Homes' proposed high-rise towers. 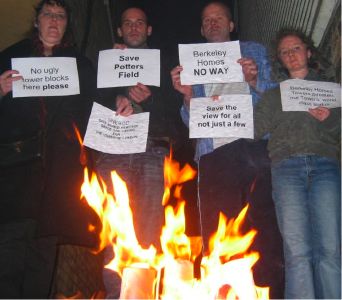 Earlier this month we revealed that Berkeley Homes intends to press ahead with the construction of three of the eight towers it has permission for on the Potters Fields coach park site next to Tower Bridge, despite failing to reach a deal with Southwark Council over the section of the site it owns.

Since then the issue has come to national attention with the news that Unesco could place the Tower of London on its List of World Heritage in Danger if nearby developments are deemed inappropriate to its setting.

An international delegation is expected to visit London to assess the impact of proposed developments.

"We are appalled to hear that Berkeley Homes intend to build three of their monstrous Dalek-dildo-like tower blocks on Potters Fields," says Alan Chapman, vice chair of the Shad Thames Residents' Association. "We totally agree with Unesco that no tower blocks should be built so close to the Tower of London."

It has emerged that Berkeley Homes intends to market the Potters Fields development under the 'One Tower Bridge' brand, with the company having registered related internet domain names this month.

This week Southwark Council leader Nick Stanton – who has consistently called for a cultural use for the prime riverside plot – rejected speculation that the council could be poised to sell its northern portion of the derelict site to Berkeley Homes.

In an email to a local activist he claimed that the developer had "failed to talk" to the council despite the pledges of a joint approach to the whole site made last year by both parties.

Asked whether the council was working on alternative plans for the council section of the site or the whole site, he replied: "... we will now concentrate on our bit".

MP Simon Hughes, a long-term opponent of the Berkeley Homes scheme, has put forward an alternative vision for the site which includes a Centre for the Americas and interactive sports museum as well as an international conference centre with easy access to City Hall.

Images of the proposed Berkeley Homes scheme can be found on the pottersfields.com website.