250 young sporting stars gathered at the Ministry of Sound last week for an awards ceremony to mark the third year of the Southwark Community Games. 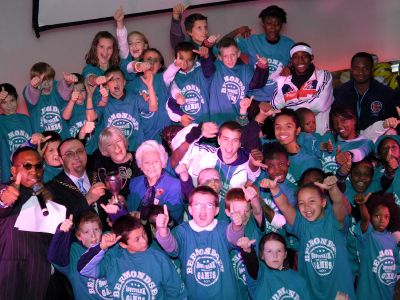 Britain's number one triple jumper, Phillips Idowu, presented awards to the eight to sixteen year olds for their achievements in a range of sports including athletics, cricket, rugby and football.

"Find something you're good at, enjoy what you're doing and you'll progress," Idowu told the young people at the ceremony.

"Even if you don't get to be a sports superstar, you'll get fit and healthy in the process which is really important."

Phillips, who competed in the 2000 and 2004 Olympics and won a Gold Medal in the 2006 Commonwealth Games, was joined on stage by the former Olympic fencing champion and member of the International Olympic Committee (IOC), Dame Mary Glen Haig.

Since the games launched in April 2004, 10,000 young people from across Southwark have represented their community council area in the games.

Young people from the Bermondsey area topped the league table this year. Camberwell were the runners up with Dulwich in third place.

A series of young winners from each of the eight community council areas were also honoured, receiving a trophy for their positive attitude, attendance record and personal achievement.

"The levels of commitment and enthusiasm that Southwark's youngsters have shown during this year's games has been really inspiring," says Cllr Lorraine Zuleta, executive member for culture, leisure and sport.

"The games give every young person, regardless of their ability, a chance to get active and pick up new skills.

"It has been another exceptional year for sport in Southwark and I hope that some of the young people who took part in this year's games will make it as far as the London 2012 Olympics."

The ceremony ended with a display by XP street dance group and the Ministry of Sound was turned over to the children and young people for an evening of music and dance.